Do K+ and F- ions have the same ionic radii? [closed]

Ask Question
Asked 5 months ago
Active 5 months ago
Viewed 354 times
-1
$\begingroup$
Closed. This question is off-topic. It is not currently accepting answers.

Since fluorine and potassium form ions to gain the electronic configuration of neon and argon respectively, then shouldn’t $\ce{K+}$ have a greater radius, as argon is larger than neon?

Also which would have a bigger atomic radius, potassium or fluorine?

The original question is

Why do K+ and F− ions have the same ionic radii?

They don't according to wikipedia: 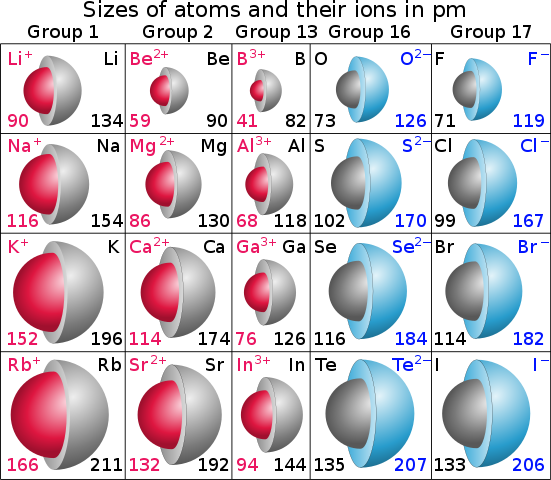 They do according to "Data taken from John Emsley, The Elements, 3rd edition. Oxford: Clarendon Press, 1998."

As @andselisk wisely mentions in his comments, radii depend on coordination number (and on how distance between anion and cation are turned into a single radius - you have to set one radius somewhat arbitrarily).

Not the answer you're looking for? Browse other questions tagged atomic-radius or ask your own question.