Terminology of atomic spectroscopy: Difference Among Term, States and Level

In A Primer on Quantum Numbers and Spectroscopic Notation Contents, the concept of a term and level is described as

a) The level is the set of 2J+1 states with specific values of L, S, and J. The difference in the energy between two levels gives the wavelength or frequency of an atomic transition.

b) The term is the set of levels characterized by a specific S and L.

1) Is there a better way to understand the subtle difference among the concept of a level, a state, and a term. A example would be helpful.

2) A side question is what are the German equivalents of term, state and level. What do they call it in atomic spectroscopy literature? Thanks.

The figure below shows the situation between configuration for a $p^2$ configuration, terms, levels and states. The word 'state' tends to be used colloquially to mean any of Term, Level or State.

These are split with electrostatic (Coulomb) coupling to form Terms.

The term symbol is

The Terms are split with a magnetic interaction such as spin-orbit coupling, i.e coupling of spin angular momentum with that of the orbital. It is not present for S orbitals because here $L=0$.

Levels are distinguished by total angular momentum $J$, and are $2J+1$ degenerate.

An external magnetic field will remove all remaining degeneracy to form States. These are distinguished by $m_J$ and there are $2J+1$ of them. 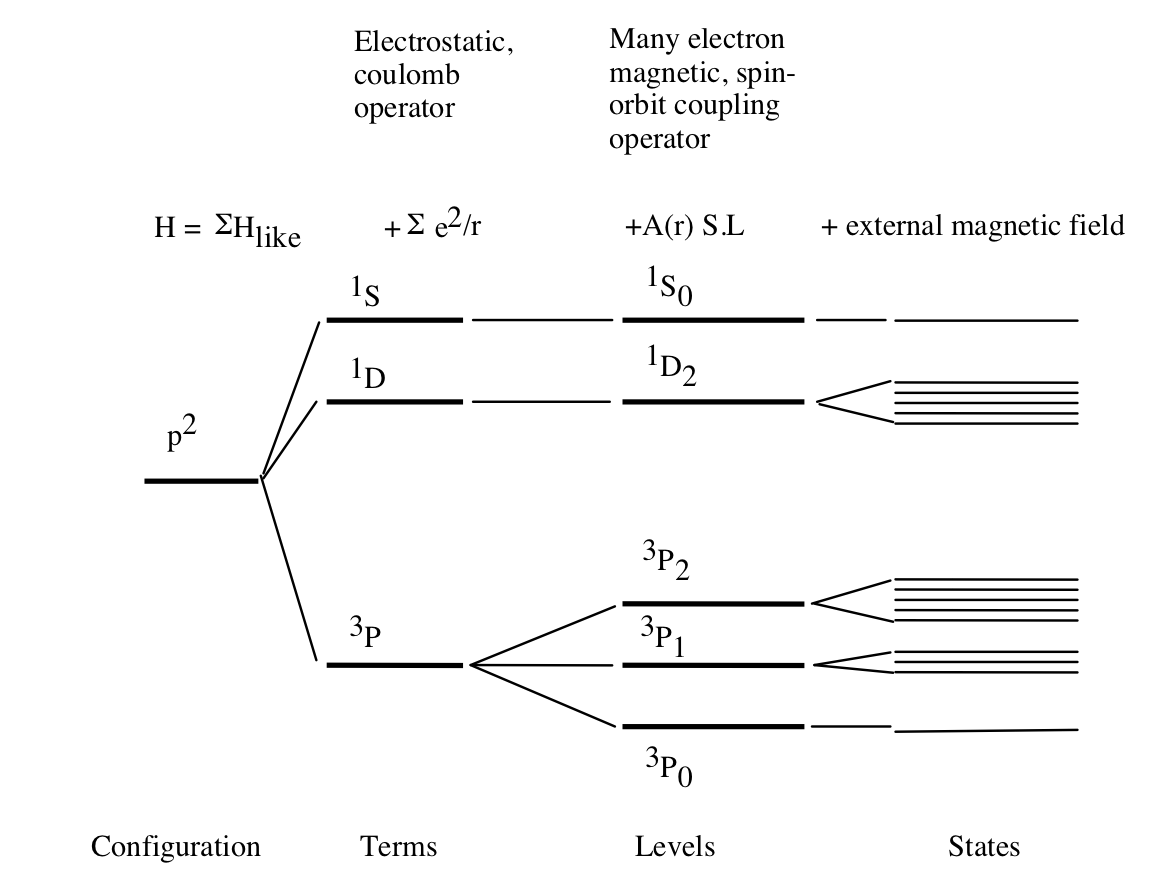 To answer the side question about German language terminology, I'll pick up terms from @porphyrin's answer.

But first of all, term = Term (same as in maths)

The word 'state' tends to be used colloquially to mean any of Term, Level or State.

All those colloquial states are Zustände (pl., sg. Zustand) in German or you can use Term, Niveau (level) and Zustand (state). I'd say that in German, Zustand is an Oberbegriff (umbrella term) that includes specific types of Zustände such as Terme (Zustand with fixed L and S) and Niveaus (Zustand with fixed L, S, and J).

See e.g. The German wiki page https://de.wikipedia.org/wiki/Spin-Bahn-Kopplung#LS-Kopplung_bei_mehreren_Elektronen for all those terms in their native environment.

Not the answer you're looking for? Browse other questions tagged physical-chemistry spectroscopy terminology atomic-structure or ask your own question.

3
What exactly are electron states?

10
What are the differences between the Hilbert space and real space representations in chemistry?
3
Restrictions on transitions in Spectroscopy
8
Connection of term symbols with specific microstates for atomic carbon
2
How can every atom have unique spectral lines?
5
Why is the spectroscopic entropy of carbon monooxide higher than that of nitrogen?