What is the mechanism of oxidation of phenol to benzoquinone?

I looked up the mechanism in a lot of organic chemistry books, including Clayden, Klein, Solomons, McMurry but I couldn't find the mechanism of oxidation of a phenol. I also looked it up in pharmacognosy books, but with no luck. All I could find in these books is the following scheme, with no mechanism: 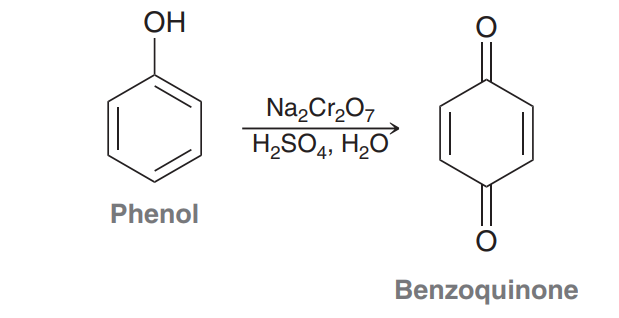 It seems like other oxidizing agents can be used, such as hydrogen peroxide and silver oxide.

Unlike primary and secondary alcohols, phenol doesn't have an hydrogen atom attached to the carbon directly bound to oxygen. My guess is that the double bond of phenol will react with the oxidizing agent, but not sure of how this will work.

The reaction is used industrially to make hydroquinone (source: wikipedia), but often using hydrogen peroxide as the oxidation agent in the presence of a catalyst.

A study on catalytic hydroxylation of benzene comes to the following conclusion:

The Fenton-like mechanism refers to addition of a free oxygen radical species to benzene, which they reject based on experiments with radical scavengers. Instead, they hypothesize formation of a radical oxygen:catalyst complex. This either reacts with benzene in an electrophilic substitution, or abstracts a hydrogen from benzene, which then rebounds and reacts with the oxygen still attached to the catalyst.

Although the study I am citing is for hydroxylation of benzene instead of phenol, the paper also talks about substituted benzenes.

[OP:] My guess is that the double bond of phenol will react with the oxidizing agent, but not sure of how this will work.

You can't pin down a single double-bond in an aromatic system. What you can say is that the existing hydroxyl group will steer the reaction to make an ortho- or para- product. Once hydroquinone is formed, it oxidizes quickly to benzoquinone under the oxidizing conditions.

[OP:] What is the mechanism of oxidation of phenol to benzoquinone?

For the reactions conditions given by the OP, I did not manage to find a mechanism. However, the mechanisms I discussed probably are sufficiently general that they apply in this special case as well. That is just a guess, though.

51
Regioselectivity of acid-catalyzed ring-opening of epoxides
13
What are the products of the reaction between methanamine and nitrous acid?
1
Dependence of primary alcohol oxidation on presence of water and "strong" or "weak" oxidants
8
Mechanism of DPD (N,N-diethyl-p-phenylenediamine) reaction with free chlorine
9
Effect of substituents on arene oxide-phenol rearrangement
3
Rearrangement in dehydration of alcohol