I looked into how the van der Waal's equation and how it was derived. Reading the Wikipedia page about it, I find that van der Waal's assumed that gas molecules are hard incompressible objects that have a certain volume (evident by the constant $b$, defined as the volume occupied by one mole of molecules themselves), and these molecules attract each other (I couldn't find how these molecules attracted each other, like perhaps inverse square or cube?). I find the rigid volume assumption a little too generous. I also know that molecules attract each other at long ranges due to London dispersion forces, but these dispersion forces also act as repulsions when the molecules get too close. We can describe this by the potential energy of the two molecules: 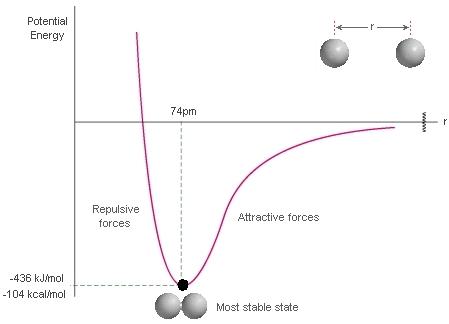 Next, we introduce a (not necessarily pairwise) attractive force between the particles. van der Waals assumed that, notwithstanding the existence of this force, the density of the fluid is homogeneous; furthermore, he assumed that the range of the attractive force is so small that the great majority of the particles do not feel that the container is of finite size.[citation needed] Given the homogeneity of the fluid, the bulk of the particles do not experience a net force pulling them to the right or to the left. This is different for the particles in surface layers directly adjacent to the walls. They feel a net force from the bulk particles pulling them into the container, because this force is not compensated by particles on the side where the wall is (another assumption here is that there is no interaction between walls and particles, which is not true, as can be seen from the phenomenon of droplet formation; most types of liquid show adhesion). This net force decreases the force exerted onto the wall by the particles in the surface layer. The net force on a surface particle, pulling it into the container, is proportional to the number density

So we can see that the pressure correction factor is described by considering the force experienced by the particle is proportional to the number density of the particle. This seems well and good for the van der Waal's equation, since it only considered attractions. In my case, I dont think it's so simple. Molecules closer to the molecule in consideration would repel it, and those further would attract it. I have no idea on how to incorporate this in terms of number density, even though I believe it's possible (denser gas would mean more attractions as well as more repulsions, and depending on the Morse potential is what would decide if actual pressure is more or less). This where I need help. How do I incorporate the Morse potential curve into the pressure correction factor?

Browse other questions tagged gas-laws or ask your own question.