Why does the image of cyclo[18]carbon look like a nonagon?

The $\ce{C18}$ allotrope cyclocarbon has been synthesized and imaged.[1] Science has most details behind a paywall, but this discussion includes an image:

In this octakaidecagonal molecule, each $\ce{\color{blue}{C}}$ is bonded viz. $\ce{C-\color{blue}{C}#C}$. Yet the above image looks like a nonagon. Why does every other carbon atom stand out as an obvious vertex while the others don't? My thoughts:

The first thing to say is that I'm not sure where that image is taken from; it's neither in the original article nor in the supporting information to the article. Therefore, it appears to be more of an "artist's impression" rather than an actual atomic force microscopy (AFM) image, which is what was reported in the paper.

Nevertheless, the actual AFM images of $\ce{C18}$ are in Figs. 3Q and 3R. They are referred to as "AFM far" and "AFM close" respectively because of the height of the probe ($\Delta z$): 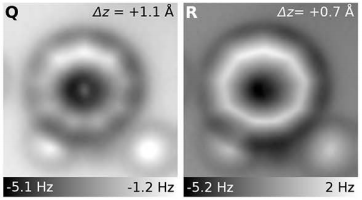 One can indeed see that there is 9-fold symmetry (technically, $D_\mathrm{9h}$). This implies that $\ce{C18}$ has a 'polyyne' structure in which there are two different types of bonds $\ce{-C#C-C#C-\phantom{}}$, rather than a 'cumulene' structure in which every bond is equivalent $\ce{=C=C=C=C=}$ (prior to this, computational studies had been equivocal as to which form was more stable).

The bright spots within the ring do not correspond to carbon atoms, but rather to carbon–carbon triple bonds. This is consistent with the AFM images obtained for other similar intermediates in the synthesis of cyclo[18]carbon. In the authors' own words:

Assigning the bright features in the “AFM far” images to the location of triple bonds, we observed curved polyyne segments with the expected number of triple bonds: 5 in $\ce{C22O4}$ and 8 in $\ce{C20O2}$. At small tip height, we observed sharp bond-like features with corners at the assigned positions of triple bonds and straight lines in between. This contrast was explained by CO tip relaxation, in that maxima in the potential energy landscape, from which the tip apex was repelled, were located above the triple bonds because of their high electron density. In between these maxima, ridges in the potential landscape led to straight bond-like features.

(The two bright spots outside the ring are due to individual $\ce{CO}$ molecules.)

13
How small is the smallest known carbon ring containing only double bonds?
0
Is cyclo[18]carbon aromatic?

2
Why elemental carbon is solid?
1
Does diamond have a pungent smell like graphite?
4
What elastic polymeric material look like at molecular level?
2
What will "Efavirenz amino alcohol methyl carbamate" look like?
7
What does the crystal field splitting diagram for trigonal planar complexes look like?
13
2017 Nobel Prize; What does Cryo-electron microscopy data actually look like?
3
Why don't carbon nanotubes behave like quantum dots?
0
How does the molecule consisting of two bridged aromatic rings look in 3D?