Why is the binding angle of HOF lesser than that of H2O, despite the lone pairs and size of the flourine? [duplicate]

Why is the binding angle of HOF(101°) lesser than that of H2O?(104.5°) Since fluorine has unpaired electrons wouldn't it repel hydrogen more strongly than the corresponding hydrogen of H2O? Also, the size of fluorine is bigger than hydrogen, which also should have made the repulsion greater.

In $X_2O$ molecules, such as $H_2O$, $F_2O$, $Cl_2O$, the oxygen is at the center of a tetrahedron and therefore theoretically the X-O-X bond angle should be 109.5°. However, this is never the case and it's always a balance between the repulsion of the two lone pairs of the oxygen(they repels more strongly than the bond pairs) and the steric repulsion of the X atoms.

Among the series H, F, Cl, hydrogen is the least electronegative and fluorine the most. F is very electronegative and thus the electron density of the O-F bond near O is less than that in O-H.
If the electron density is farther away from the oxygen, then the 2 lone pairs of O squeeze the two bonding pairs closer together and the F-O-F bond angle will be less than the H-O-H angle.
Based on the electronegativity, you should expect that the Cl-O-Cl bond angle is less than H-O-H but more than F-O-F. This is not the case and the reason is that chlorine is big enough so that the steric repulsion prevails. 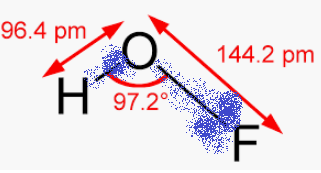 The reason for this unexpected small angle is that the bond length O-F and O-H are very different and their electron density(bond pairs) don't interact much and therefore they repel even less than in the F-O-F case(see picture above, where electron density is represented in blue).

9
Which has the largest bond angle between water, oxygen difluoride and dichlorine oxide?

4
What's the H-C-H bond angle in ethene?
0
Identifying the number of bonding and lone pairs without a dot and cross diagram
10
Why does SO2 have a larger bond angle than H2O, H2S, and NH3
7
Why the bond angle of PH3 is lesser that that of PF3?
6
Estimation of the bond angle of water
1
Relation between various bond angles of Nitrogen compounds
8
Why is the H−C−H bond angle in сhloromethane larger than 109.5°?
2
Why do the lone pairs of electrons first occupy axial positions before occupying equatorial positions for species with octahedral geometry?
0
POI is a bent molecule similar to water. How are the two molecules different it terms of bond angles and what causes this?