Use IUPAC system to name the structural diagram below

Ask Question
Asked 2 years, 4 months ago
Active 2 years, 3 months ago
Viewed 172 times
-1
$\begingroup$
Want to improve this post? Provide detailed answers to this question, including citations and an explanation of why your answer is correct. Answers without enough detail may be edited or deleted.

The longest carbon chain is a 5 membered chain with a carbon-carbon double bond. Since double bond must be given the least locant, we number it from the leftmost carbon as in your image. The substituents are named accordingly by indicating their positions.

For the stereochemistry aspect of the compound, we observe the following: 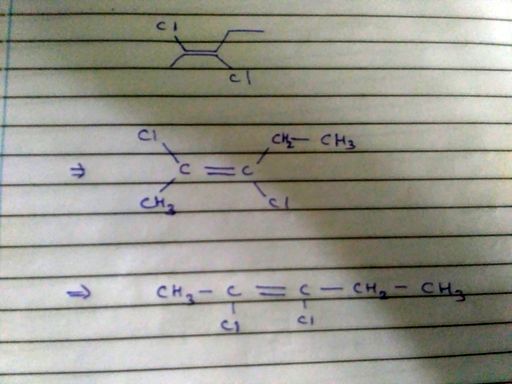 As per the rule:

4
Why doesn't this structure represent a substituted pentane?
5
How to rationalise the IUPAC name for tetrahedrane?
0
Have I identified the IUPAC name of this ketone correctly?
2
Are these alternate names for long chain hydrocarbons with complex substituents accepted?
1
Assigning Cahn-Ingold-Prelog priority numbering rules for 2 groups
2
How to arrive at the preferred IUPAC name for 1,2-diphenylethane?