I have just started reading group theory and their applications in the MO theory. I tried to get the equations of the pi molecular orbitals of allyl system using group theory, but I am stuck at the last part.

This is what I did so far— 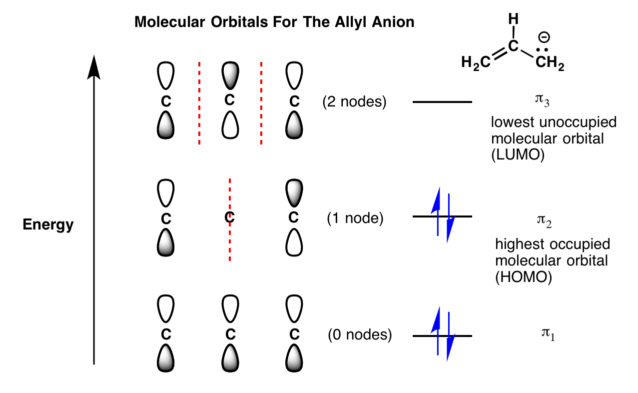 The calculation below is not exactly the same as yours but I had it to hand and it is very similar. The bit you specifically want is towards the end. In your case you add will vectors along the $\pi$ orbitals.

What projection operators operators do is to extract the symmetry adapted functions from the basis functions used to form them and so produce a linear combination L of the basis functions. Many basis functions can be chosen, but the easiest to use are usually vectors pointing along bonds or those representing a p$\pi$ orbital. To form a linear combination, a 'victim' vector is chosen and operated on with each symmetry operation in the point group, $C_2\,, \sigma(xz)$, etc. to find what vector this turns into. This vector's name (the basis function) is then multiplied with the character from the point group corresponding to that symmetry operation and symmetry species. Finally, the names are added together by moving from one symmetry operation to the next along the top row of the point group. We expect the result to be the sum or difference of the displacement vectors for a molecular vibration, such as $2v_1 + v_2 - v_3 \cdots$ and so forth. The same formula or algorithm is used if the combinations of atomic orbitals that make up molecular orbitals are sought. The equation to make a linear combination is

where $M$ is the symmetry species label, $A_g, B_{3g}$, and so forth, $h$ is the order of the group, $d$ the dimension of the irreducible representation, and the sum is over all the classes. Because the resulting vector will be normalized d/h can be ignored. One further point is important. In the $C_{3v}$ point group, for example, there is a heading $2C_3$ as there are two members in this class, and this must be split in the summation into $C_3^+$ and $C_3^-$. This is because moving a vector $120$ degrees to the right, say, will turn it into a different vector than turning 120 degrees to the left, similarly, any mirror planes must be separated out. The character for symmetry species $M$ is $c_j$ and $S_j(t)$ is the effect that operator $S$ in column $j$ of the point group has on our victim vector $v$. The result of this operation is to produce a vector whose name is recorded. For example, if $S$ is the identity then the result is $E_1(v) = v$, other operations may leave $v$ unchanged or change it into another vector. Finally, note that if the reduced representation of the vibrations or molecular orbitals contains two or more symmetry species of the same type, e.g. $2A_1$, then two or more different victim vectors will have to be chosen to obtain all the linear combinations.

In H$_2$O, SO$_2$%, and other triatomics with $C_{2v}$ symmetry, it is clear that two of the vibrational modes stretch the bonds and one changes the bond angle. To work out the normal mode vectors, some representative vectors are placed along the bonds as in the figure. You can choose where to put these but physically realistic choices will usually make the calculation simpler. 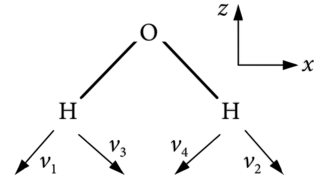 In $C_{2v}$, the normal mode vibrations have been found to comprise the symmetry species $2A_1$ and $B_1$. The $L_M$ formula is shown as a table with $v_1$ as the victim vector. The table also shows the characters for each symmetry species.

There are two $A_1$ species produced from the reducible representation but only one has been found so far. This is because the vectors $v_1$ and $v_2$ cannot produce a bend, which is the other normal mode. Using vector $v_3$ as the victim this species appears. As this mode has $A_1$ symmetry all the characters $c_j$ in the $L_M$ formula are $1$, making the calculation easy and the combination is shown below.

which describes the bending mode shown in the figure in terms of its unit vectors. When normalized this mode is $(v_3 + v_4)/\sqrt{2}$. (As the centre of mass cannot move during a vibration, there being no force to make it do so, therefore the O atom has to move a small distance away from the H atoms. Vectors could be added onto the O atom to show this and $L_M$ terms re-calculated.

In the case of degenerate symmetry species as occurs in the $C_{3v}$ and most other point groups the results of the summation $L_M$ is to produce two or more vector sums that are not orthogonal. Either these have to be made orthogonal, by choosing another victim for the degenerate term and then using the Gram-Schmidt method to make the two vectors orthogonal. R. Carter 'Molecular Symmetry and Group Theory' and A. Vincent 'Molecular Symmetry and Group Theory' both give method by which to do this.

Not the answer you're looking for? Browse other questions tagged molecular-orbital-theory resonance symmetry group-theory or ask your own question.