My question is basic, but I have already referred to a couple of books.

This is an excerpt from Linus Pauling's book:

the most probable distance of the electron from the nucleus, which is the value of $r$ at which $D(r)$ has its maximum value, is seen from Figure 21-1 to be $a=\pu{0.529 \mathring{A}}$, which is just the radius of the normal Bohr orbit for hydrogen.
[Figure 21-1 is the Radial Probability Distribution Curve (RPDC) for the 1s orbital, see below.]

And on the next page he states that: 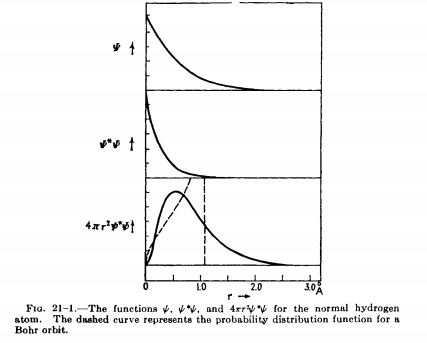 It is very important to note here that $R(r)$ is just the radial part of wavefunction. Wavefunction does not describe any observable. The Born interpretation says that the probability density of finding electron between any two points $x_1$ and $x_2$ is given by $$\rho=\psi\psi^*.$$ While the probability is $$P =\int_{x_1}^{x_2}{\psi\psi^* \mathrm{d}x}.$$ (This is only in one dimension. In spherical coordinates you must integrate over the volume).
Why is there a difference between these two quantities? I think it will be easier to understand using an analogy. Consider a rod of unit length in which the charge varies as a function of $x$. Say the function is $$q(x)=x\mathrm{e}^x-1$$ The average charge of the rod is $0$. While the average charge density of this rod is $\mathrm{e}-2$. Where average is given by $$\langle f \rangle=\frac{\int^{b}_{a}{f \mathrm{d}x}}{b-a}.$$ I hope you have understood the difference between function density and the function itself. The radial probability and probability density are something similar. By seeing the graphs you can to a certain extent predict the average of the probability density and probability. In the second graph it is $0$ while in the second graph it is close to the peak which is $a_0$.

Not the answer you're looking for? Browse other questions tagged quantum-chemistry orbitals atomic-structure or ask your own question.