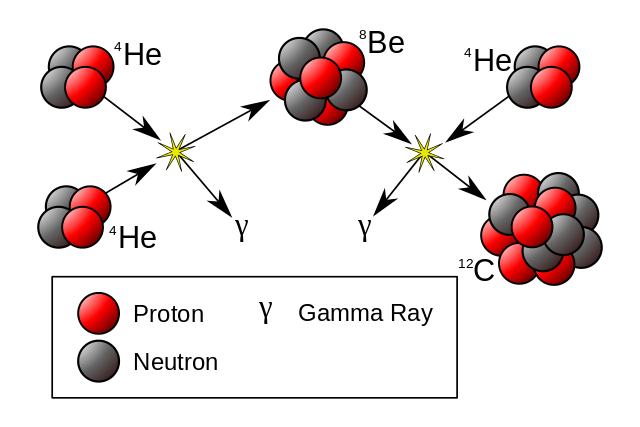 Nowhere. This is a nuclear reaction, not a chemical one. Charge is conserved and no extra electrons were supplied.

The carbon nucleus is stable with respect to nuclear decay.

Chemical stability relates only to the behavior of electrons with respect to atoms. It has no place in this nuclear reaction.

Eventually the carbon nucleus may attract additional electrons from some external source, but that's nothing to do with stability of the nucleus. The nucleus does not require any electrons to be stable.

The electrons are there, all around and intermingled with the nuclei. They maintain the requirement of charge neutrality but, at the temperatures in stellar cores, they don't do much else because there is too much thermal energy and entropy to stabilize complete atoms. So in studying reactions, we ignore them as we would a "spectator species" in an ordinary chemical reaction.

Until, that is, the star dies. Then the quantum mechanical characteristics of those electrons come to the fore in a big way, enabling the formation of white dwarfs. The electrons are ultimately important after all.

Not the answer you're looking for? Browse other questions tagged neutrons or ask your own question.