How to make 1,1-diphenyl-1-butene from benzophenone and 1-bromopropane?

I think that the carbonyl group which is a functional group composed of a carbon atom double-bonded to an oxygen atom $(\ce{C=O})$ of benzophenone will react to the alkyl halide.

But I have no idea how it reacts and proceeds to work. Can anyone help me understand the detail mechanisms and reaction procedures to make 1,1-diphenyl-1-butene from benzophenone and 1-bromopropane?

I present another (almost) two-step synthesis, involving the famous Wittig reaction. The first step details the preparation of a phosphonium ylide, which subsequently is allowed to react with the carbonyl compound (benzophenone in our case) to yield the final product, 1,1-diphenyl-1-butene. 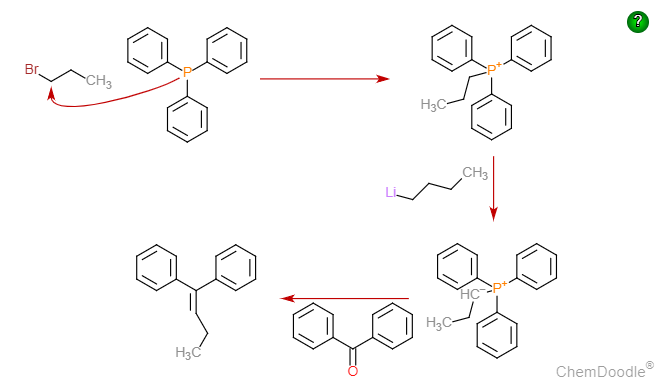 For mechanistic details, visit NotEvans.'s answer to Which is the currently accepted mechanism of a Wittig reaction?.

Not the answer you're looking for? Browse other questions tagged organic-chemistry reaction-mechanism aromatic-compounds synthesis or ask your own question.

5
Formation of azobenzene from nitrosobenzene and N-hydroxyaniline
3
How to convert ethanol to 1,1-dichloroethane?
5
3-step process to make propyl ethanoate from propene
3
How to make p-chloroanisole from methanol and benzene?
2
How to make a primary alcohol from an alkane?
5
Why does the nitrile carbon experience more shielding than a carbonyl carbon in CNMR?
3
Make pyridine from furfural