Why does silver (I) have a larger lattice enthalpy and hydration enthalpy than sodium? 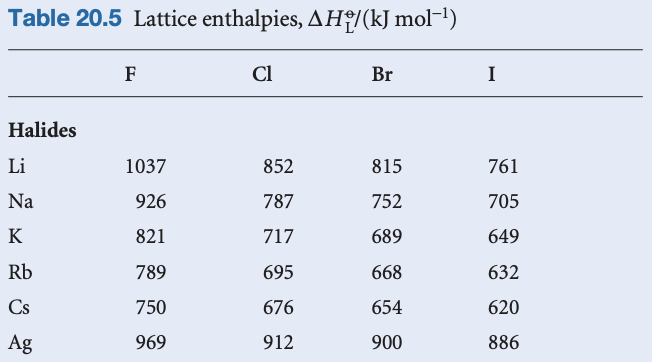 The electron configuration of sodium ion is that of the inert gas neon (1s^2 2s^2 2p^6), a spherical shell with a positive charge at the nucleus. There are 10 electrons inside this shell.

The electron configuration of silver ion is that of krypton plus 4d^10, a spherical shell with a positive charge at the center. There are 46 electrons inside this shell.

While the slightly smaller sodium ion might have slightly more polarizing power than silver ion, silver ion has far more polarizability than sodium ion. Polarizability is the distortion of the electron cloud as a result of a point charge (or dipole). Dispersion forces are a form of polarizability where two polarizable entities polarize each other. https://chem.libretexts.org/Bookshelves/Physical_and_Theoretical_Chemistry_Textbook_Maps/Supplemental_Modules_(Physical_and_Theoretical_Chemistry)/Physical_Properties_of_Matter/Atomic_and_Molecular_Properties/Intermolecular_Forces/Specific_Interactions/Polarizability

The effects of dispersion forces due to the polarizability of the anion can be seen by comparing the enthalpies. The crystal structures for the fluorides, chlorides and bromides and NaI are FCC, rock salt. AgI is wurtzite. The difference in enthalpies for the fluorides is 43, but as the polarizability of the chloride anion increases, the attraction of dispersion forces increases the difference to 125, and for bromide, 148. Even tho the crystal structure of AgI is different, it still seems to have a polarizablity-polarizability effect (difference = 181).

And very perspicacious of you to have observed this trend.

Not the answer you're looking for? Browse other questions tagged thermodynamics aqueous-solution or ask your own question.

27
Why is silver chloride less soluble than silver nitrate?
1
How does one measure the change in enthalpy of hydration?
2
What is the correct definition of hydration enthalpy and why is it always negative?
0
How to calculate the enthalpy change from the reaction of silver nitrate and sodium iodide?
6
Why might copper have a lower heat capacity than lithium according to the Shomate Equation?
7
Why does ozone have higher entropy than oxygen?
1
Why does electrode potential depend upon enthalpy of hydration and sublimation?
1
Why does lattice enthalpy decrease with increasing ionic size?