Does chilling drinking water in copper bottle result in any chemical reaction that turns it dangerous for consumption in any way?

Few days back, in summer, I carried kokum juice in copper bottle. I had a sip of it after some time when I reached office and I felt super dizzy. I felt that traveling might have an effect on me, so I stopped. I had another sip of juice after some hours I had a strong dizzy feeling. At first, the juice tasted ok but then it started tasting very very weird. When I reached home and poured the juice back out of the bottle, to my surprise, its green! The normal color of kokum juice is pinkish-reddish. So somehow copper reacted with the juice and possible resulted in some acid, even though it was at normal room temperature (or in fact cold one as the juice was prepared from cold water). I believe there shouldn't be an issue with cooling water in a copper bottle in the fridge, I just want to know if there is any slight drawback, maybe from Ayurveda point of view? Also, I hope you get the chemistry angle to this question.

Do not do it !! ( putting acidic, or rather any juice to copper bottles )

You are in danger of copper poisoning.

Generally, by food processing laws, copper is not allowed to be in direct contact with food, as there is danger of copper contamination.

For similar reasons, even if there is not copper, it is very bad idea to keep the content of conserved fruit cans in the already opened cans. You can otherwise see the juice corroding the can inner coating in air presence.

Long term usage of copper for keeping water is on the edge. It can cause chronical low dose sneaky poisoning, especially if water is treated by chlorine.

Plus, there is danger some people would want to store there other liquids than water as well, as the OP.

but if Ayurveda recommends it.... – Poutnik

Microbially-unsafe water is still a major concern in most developing countries. Although many water-purification methods exist, these are expensive and beyond the reach of many people, especially in rural areas. Ayurveda recommends the use of copper for storing drinking-water. Therefore, the objective of this study was to evaluate the effect of copper pot on microbially-contaminated drinking-water**. The antibacterial effect of copper pot against important diarrhoeagenic bacteria, including Vibrio cholerae O1, Shigella flexneri 2a, enterotoxigenic Escherichia coli, enteropathogenic E. coli, Salmonella enterica Typhi, and Salmonella Paratyphi is reported. When drinking-water (pH 7.83±0.4; source: ground) was contaminated with 500 CFU/mL of the above bacteria and stored in copper pots for 16 hours at room temperature, no bacteria could be recovered on the culture medium. Recovery failed even after resuscitation in enrichment broth, followed by plating on selective media, indicating loss of culturability. This is the first report on the effect of copper on S. flexneri 2a, enteropathogenic E. coli, and Salmonella Paratyphi. After 16 hours, there was a slight increase in the pH of water from 7.83 to 7.93 in the copper pots while the other physicochemical parameters remained unchanged. Copper content (177±16 ppb) in water stored in copper pots was well within the permissible limits of the World Health Organization. Copper holds promise as a point-of-use solution for microbial purification of drinking-water, especially in developing countries.

The paper has tabulated results of Antibacterial activity of copper pot and also Physical and chemical parameters in a copper pot as shown below. 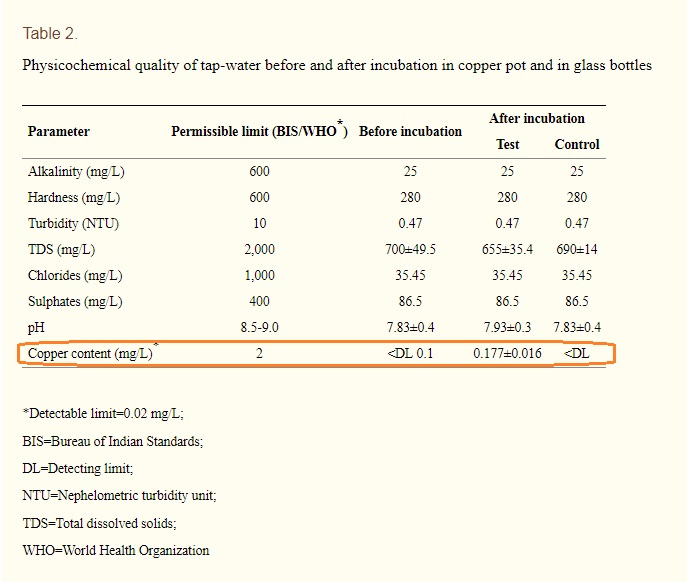 Discussion as per the paper.

Since ancient times Ayurveda has advocated the benefits of drinking water from a copper vessel.

when water is stored in a copper vessel for over eight hours, very small quantities of copper get dissolved in this water. This process is called “oligodynamic effect” and has the ability to destroy a wide range of harmful microbes, molds, fungi etc. due to the toxic effect it has on living cells.

(from Greek oligos "few", and dynamis "force") is a biocidal effect of metals, especially heavy metals, that occurs even in low concentrations. The health effect was known in India for more than 2700 years as their ancient texts prescribe.

In conclusion,Ayurvedic system$^4$ of medicine has great antiquity, dating back to about 5000 years B.C. Its Materia Medica contain resources in the form of drugs derived from plant, animal, metal and mineral sources.Ayurveda system prescribes dose in limits and not in excess.

There are two parts of your question. We should not mix historical medical practices with modern scientific truths. Also, this does not mean that all old medical knowledge is bad or useless. In older medicine, gold foil arsenic compounds, silver foil, crushed pearls and mercury oxides were added in medicines,. It does not mean that if these practices were done in ages ago, they are safe by today's standards.

For western readers, kokum juice is a berry juice (Garcinia indica), which is rich in hydroxycitric acid.
Acids in Garcinia indica. The berry is quite sour. A layman can do a quick test. Take a copper vessel and store this berry juice for half an hour. Immediately you will see discoloration and a "brand" new shiny copper surface. I have seen that on a copper cup. This implies that a significant amount of copper has dissolved. We should not store acidic juices in copper vessels.

Secondly, in older times water was not chlorinated. Chloride ions corrode copper so quickly. Add some lemon juice, salt, to a copper cup and it will corrode soon to a green color.

However, it is very much true that in older South Asian culture, copper and tin lined pots and pans were used. The coating would wash away with cooking and people would re-coat them. Aluminum took their place. Finally stainless steel came in.

Regarding storing natural water in a copper vessel, it should be fine for a shorter time (day or so). Silver vessel is a better as an anti-bacterial surface and far more inert than copper. However, nobody is rich enough to use silver (or to be born with a silver spoon as they say). Yes silverware is good for the kings and queens.

Copper is a long term liver toxin. It is also a trace essential element.

You know the Goldilock principle: Everything in moderation. Too little copper in the body, bad. Too much copper-liver damage. You just need the right amount of copper. .

Not the answer you're looking for? Browse other questions tagged acid-base food-chemistry toxicity or ask your own question.

5
Does citric acid react with carbonated water?
6
Is it possible to separate salt from food, or at least convert it into something that doesn't taste salty?
64
Why does pasta really boil over?
6
How to find out pH of aquarium and apply it when adding HCl?