What do the letters Y, Q, P and N mean in three-letter combinations involving DNA and/or RNA?

It is not always possible to obtain an absolutely precise result from automated DNA sequencers, mostly due to too much background noise or two very close peaks which the computer has difficulty reading.

An example of a very noisy four-color chromatogram from a sequencer (sanger):

As you would notice, there are several ambiguous spots and the computer algorithm can be confused or mis-call the wrong nucleotide. Often humans are called in to resolve such ambiguities. It's a fairly common practice.

Sometimes the ambiguity goes beyond a solid conclusion, like when two or more peaks have almost the same intensity.

In that case it is better to explicity label those ambiguous nucleotides as either, say A or B, rather than report a possibly incorrect sequence. Thus was born the incompletely specified nucleic acids.

Here's where IUPAC comes in: the single letter code recommendations. 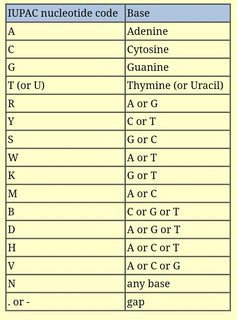 The "N" in GGN, TCN and CCN would mean the third codon was completely ambiguous and could be any one of tbe four bases. Y would mean pyrimidine (C, U or T).

This would satisfy your query with the exception of the letters P and Q, which I assume were wrongly picked up, or the code was for proteins (amino acid) sequence single letter code.

Not the answer you're looking for? Browse other questions tagged dna-rna or ask your own question.

9
Why is DNA negatively charged and what makes it so?
7
What is palindromic DNA?
1
Why does a larger DNA gel box require a higher voltage to move DNA at the same speed?
3
Which is more stable chemically: DNA or peptide