Can we tell if a compound is explosive by just looking at its chemical structure?

If I showed you a compound's chemical structure will you be able to tell if it can be used as an explosive or we can only know that by conducting chemical experiments?

A compound, a mixture may explode under different conditions. As an example, for some of them it is heat, other require electric discharge or mecanical impact to decompose. There are classes of compounds with known examples of explosives (azides, picrates, fulminates) so one may infer new compounds within these classes equally might be explosives, too.

Among modern explosives, increasing the number of nitrogroups or / and increase of nitrogen content over other elements present is a theme, like octanitrocubanes. See the Klapötke group in Munich / Germany working on 5,5’-azotetrazolate salts, too. 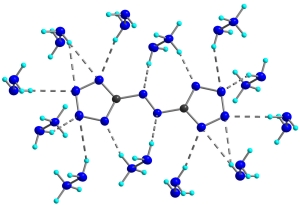 13
Which chemical properties make a substance explosive?
1
Can dry ice explode?
1
How can I determine if a chemical will dissolve aluminum oxide, on paper?
0
Pyrotechnic “star” without oxidizer
6
What chemical explosives detonate when exposed to alpha particles or nuclear fission products?
13
Why do most explosives have symmetrical chemical structures?
3
Why is nitroglycerin so unstable?
4
How explosive is benzene compared to TNT?