What is the mechanism of this pyrylium synthesis?

In this preparation, http://www.orgsyn.org/Content/pdfs/procedures/CV5P1106.pdf, 2,4,6-trimethylpyrylium perchlorate is prepared from 4 molecules of acetic anhydride and 1 molecule of t-butanol.
However, I cannot find a mechanism of this reaction, nor can I think of one. Could someone please provide the mechanism? Thanks.

I tried to work out a mechanism from the information I could gather about the reaction. If someone notices something odd/wrong please comment and I'll fix it.

The steps are either showing the protonation or skipping directly to the protonated forms of the reactants, them being in acidic medium.

Not very complicated, in acidic conditions we remove the hydroxyl group from the t-butanol to form isobutylene. The latter behaves as a nucleophile in the next steps of the reaction. This step is acid catalysed, so the acid is not consumed.

Shows the Mesityl Oxide tautomerism, important because the tautomer that will react to form the final product is the one in the right (with the double bond in the terminal carbon). 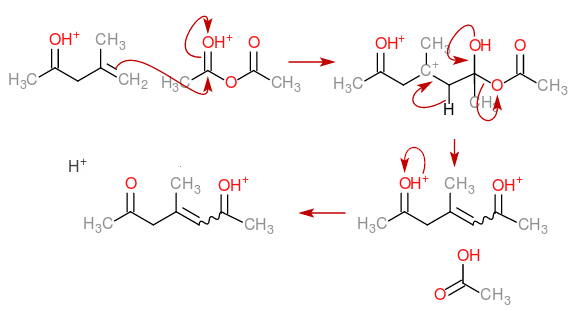 Here a Enol is formed by a nucleophilic attack of the Mesityl Oxide over another Acetic Anhydride molecule (protonated by the acidic medium). In the last step I added the deprotonation of the more acidic oxygen to respect Pauling's rule of charges by keeping an overall +1 charge in the molecule. The left oxygen is more acidic since the other oxygen can better stabilize the charge with delocalization. I wrote the molecule with wavy bonds because I'm unsure about the stereospecificity of the step, but maybe the Z conformation is favored due to the charges on the oxygens repelling themselves?

Final step is cyclization of the intermediate, by nucleophilic attack of the carbon by the deprotonated oxygen. The intermediate is dehydrated and rearranged to form the final product (releasing a proton to reach aromatic status). This step had an intermediate with +2 charge, which I'm a little skeptical about due to the Pauling's rule of charges, so I also draw the mechanism as a concerted step:

If the rule of charges isn't that strict, maybe the non-concerted path is a closer description of what's happening, but I'm keeping both here for now. If anyone thinks one of the two is the right one, comment and I'll update the answer.