Assume a cell path length, b, of 1 cm, and assume a single absorber, having triangular molar absorptivity spectral profile (Fig. 1): 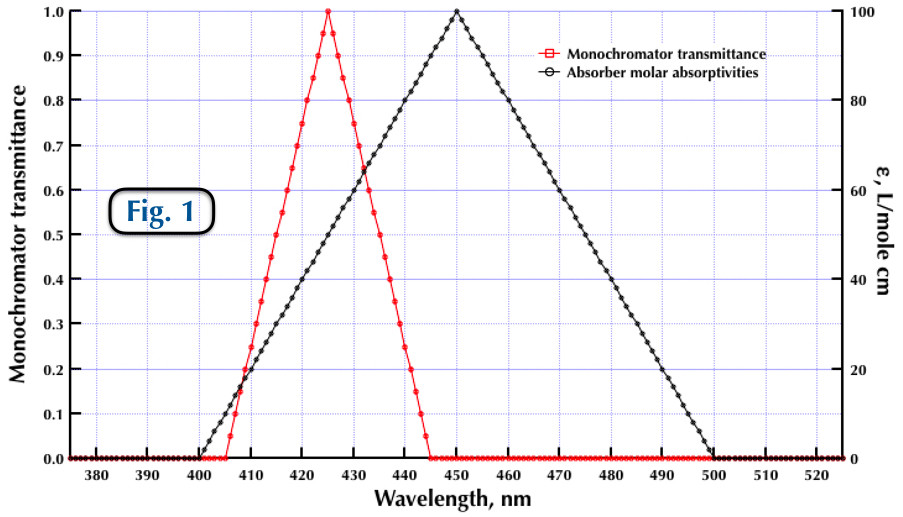 The peak molar absorptivity, $\ce \epsilon_{450 nm}$, is 100 L/mole cm at 450 nm. Assume the absorber concentration, c, ranges from 0 to 0.01 M. In the figure, the absorber’s molar absorptivity spectral profile is modeled as an isosceles triangle. In reality, absorber profiles are often modeled [1, p. 164] as Gaussian, Lorentzian, Voigt, or whatever the underlying physics requires. Here, however, an isosceles triangle is used for mathematical simplicity.

The figure also shows a narrower red isosceles triangle, centered (and having unity transmittance) at 425 nm and having full width at half maximum height (FWHM) equal to 20 nm. This red triangle is the transmittance spectral profile [2, equation 3-60, p. 70] of the light that exits a monochromator, assuming white light of uniform (unity) intensity is incident upon the monochromator and also assuming both 10 nm/mm reciprocal linear dispersion (RLD) and 2 mm slits ($\ce W_{slits}$). With white light incident on the entrance slits of the monochromator, the exiting light has $\ce S_{source}$ = RLD x $\ce W_{slits}$ = 20 nm. Note that $\ce S_{source}$ is defined here as the FWHM of the spectral profile: this is not the only possible such definition, but it is satisfactory for present purposes. Before proceeding, note that a 0.1 M monochromator typically has something like RLD = 4 nm/mm and 2 mm slits are relatively huge, as slit widths go, so the light source’s profile is polychromatic (and not good at all). Indeed, the FWHM is 20 nm, while that of the absorber is 50 nm. 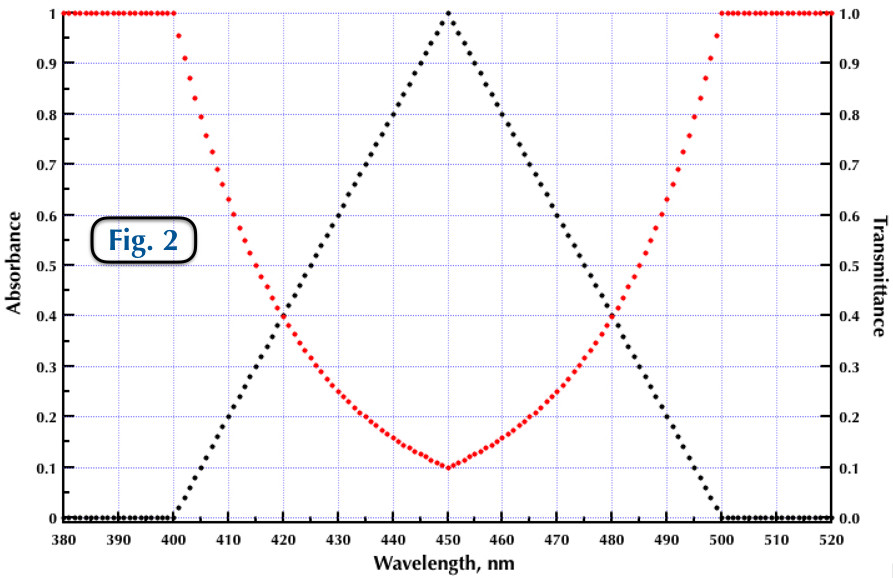 However, for the light source profile in Fig. 1, the Beer’s law plot will curve downward, as undergrad textbooks like to show in cartoon form, and the absorbance at $\ce c_{max}$ will be less than 0.5.

Question: For the above scenario, with the specified polychromatic source profile in Fig. 1, what is the absorbance at $\ce c_{max} = 0.01 M$?

Hints: 1) Forget about undergrad textbooks for this. 2) There is no added noise or error. 3) The light source cannot be modeled as a pair of monochromatic lines.

Assume the photodetector responsivity is flat from 200 to 700 nm and dark response is zero. There is no detector or preamplifier noise, no digitization error, and no source shot noise. This is idealized in every reasonable way except for the polychromatic source, which, of course, no one would deliberately use.

There are several ways to answer the question, so here are my three. The first answer involves using a simple integer wavelengths approximation, i.e., noticing that Figs. 1 and 2 have 1 nm point spacing, and then using a spreadsheet to perform a summation. The answer explained in this part also serves to define the terms used in the second answer, which involves analytic calculation of the relevant overlap integrals. Then the third answer, not discussed in detail, uses a Mueller calculus-based method. Before proceeding to the explanations, the numerical answer to the question is $A_{maximum} = 0.46951302113867$ at $C_{max} = 0.01 M$ and Fig. 4 shows the absorbance as a function of concentration: 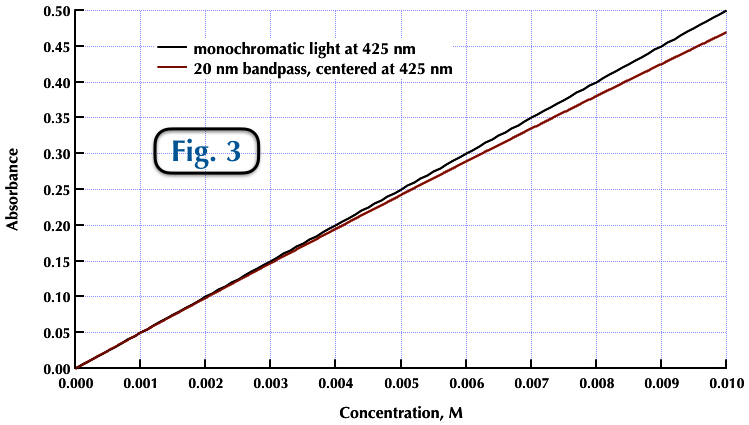 The absorbance is 93.9% of the ideal value (i.e., 0.5) at $C_{max}$, despite the source being significantly polychromatic, and the Beer’s law plot is convex, but perhaps less than might have been expected intuitively.

All three of the answers and explanations that follow are based on the model shown in Fig. 4 below:

From Fig. 4, it is clear that $I_{reference}(\lambda )$ = $I_{incident}(\lambda )$, assuming the mirror is ideal. This is simply the unattenuated incident light intensity on the lower PD-TIA. The photodiodes were stated to have flat responsivities, i.e., spectrally constant responsivities, so their photocurrent responses are independent of wavelength. Hence, the responsivities, in this idealized scenario, cancel out when transmittance is computed later. Likewise for the constant transimpedances, which are assumed equal. Hence, it suffices to simply ‘add up’ the light intensities, for each color of light, incident at each PD-TIA. Now to the answers and explanations. 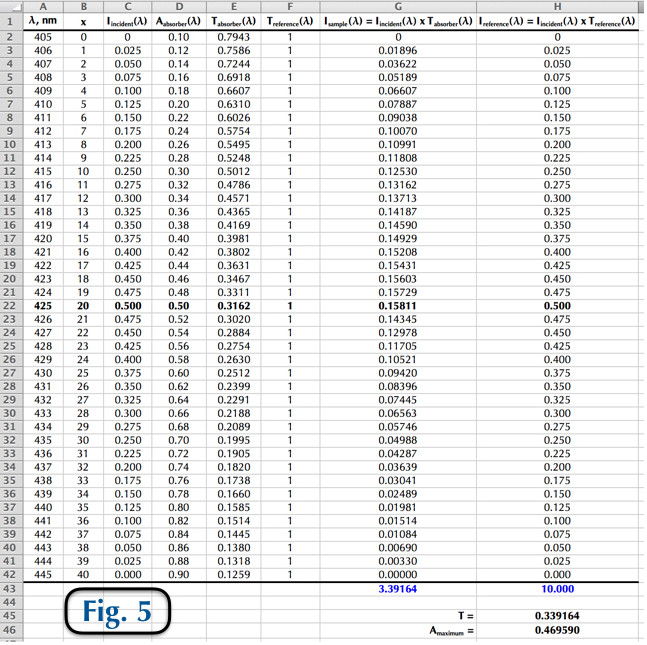 In Fig. 5, column A contains the wavelengths and column B is a unitless “x” variable that is relative to 405 nm, i.e., at 405 nm, x = 0 and so forth. Column C contains the incident light intensities, column D has the associated absorbances and column E has the corresponding transmittances through the absorber. Column F has the unity transmittances for the reference beam path, column G has the $I_{sample}(\lambda )$ values and column H has the $I_{reference}(\lambda )$ values. Adding up the 41 values in columns G and H yields total intensities: 3.39164 and 10.000, respectively. Then T is simply 0.339164 and $A_{maximum} = 0.469590$. This is close to the true value, as computed in the second answer, despite the rather coarse “discretization” of the wavelengths.

The analytical method worked, as expected, but the system was so heavily idealized that it was essentially a “spherical cow” and they don’t milk. Any realistic complications, e.g., even simply using a tungsten bulb light source, make the analytic method harder and it does not take much to make the equations all but analytically intractable. Then numerical methods may be employed, but the difficulty then mostly lies in getting the right model equations: correctly evaluating equations is not necessarily the same as evaluating correct equations.

What about convolution? Convolution, per se, is unnecessary in this heavily idealized problem, for the reasons discussed below. First, note that the spectral profile of $I_{incident}(\lambda )$ is the same as the monochromator’s transmittance profile (shown in Fig. 1), except for having a maximum value of 0.5 rather than unity. The spectral profile is symmetric. Second, the absorber’s transmittance profile is as shown in Fig. 2 and it is also symmetric. Third, the convolution of two real functions involves reversing one of the functions and then computing the overlap integrals as a function of a shift parameter, i.e., a relative displacement of the two functions. Since the two functions to be convolved are both symmetric, nothing needs to be reversed, so the convolution reduces to computing the overlap integrals as a function of a shift parameter, $\tau $. Zero displacement, i.e., $\tau = 0$, can be conveniently defined as when the two functions are perfectly aligned.

The next step is to compute the convolution function either analytically, if possible or desired, or numerically, if necessary or convenient. Then the convolution function would be evaluated at $\tau = 25$ (nm), since this corresponds to the 25 nm shift between the two spectral profiles and $\tau $ is integer valued, i.e., data values are available every nm, as shown in Fig. 5. With finer wavelength spacing, the shift would scale up accordingly. If the convolution is computed analytically, then $\tau $ is a real number.

For the data in Fig. 5, the numerically computed convolution is shown in Fig. 6: 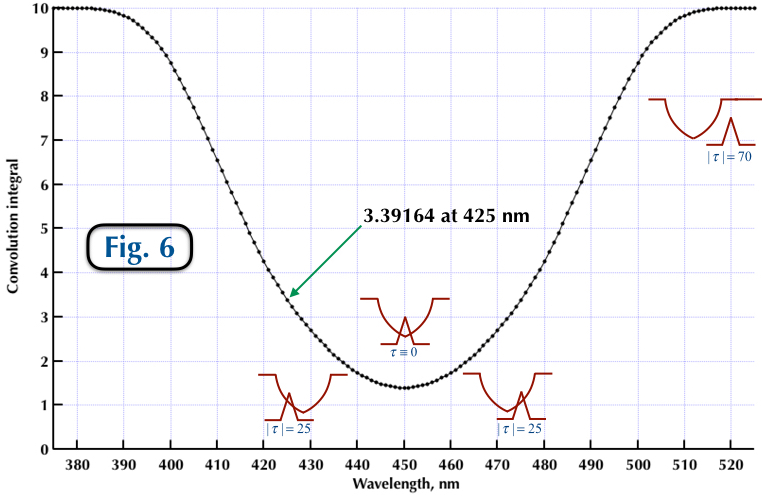 From Fig. 6, the value of the convolution at 425 nm is 3.39164, as in Fig. 5. If the two spectral profiles do not overlap, then the value of the convolution is 10, as expected. But note that all that was needed was the single overlap integral at the known $\tau = 25$ (nm), and that value is 3.39164, as shown above. For the reference beam path, the overlap integral was 10, as shown in the trivially simple calculation above.

Answer 3: Figure 4 appears to just be a schematic block diagram, but it is actually a screenshot of a Mueller optical calculus-based computer simulation program. Although discussion of the fundamental principles of the several optical calculuses is beyond the scope of this answer, both Mueller calculus and Jones calculus were invented in the early 1940’s and there is a considerable body of information about them in the literature, e.g., [1-4].

The plot shown in Fig. 3 was obtained by using 1,001 concentrations: 0 to 0.01 M, in increments of 10 µM. The wavelength range was from 405 to 445 nm, in 1 pm increments. Thus, with every one of the 1,001 simulation steps, stacks of 40,001 Stokes vectors (used in Mueller calculus) were passed, starting with the lamp block and ending with the sample and reference PD-TIA blocks. Both of those blocks, for every step, computed 40,001 intensities, multiplied them by responsivities, summed the resulting photocurrents and then multiplied by the transimpedances.

In the present case, the responsivities were simply constant default values (0.1 A/W) and the transimpedances were $1 k\Omega$. For every step of the simulation, T was computed as the quotient of the real number outputs of the two PD-TIA blocks and $A_{maximum} = -log(T) = 0.46951302122$. Compared with the exact answer, this differs in the ninth decimal place. As well, there was no need to solve any equations or use a spreadsheet: no wheel had to be re-invented.

Another of the advantages of using optical calculus-based spectrometric simulations is that they can easily accommodate non-idealities, such as realistic lamp spectral profiles and photodetector responsivities, imperfect beam splitters and mirrors, polarized light, optical activity, circular dichroism, stray light, light source modulation and so on. In fact, any linear optical effect can be modeled with an optical calculus. In addition, noise effects are easily included, e.g., detector/preamplifier noises and light source noises, including low frequency noises.

Summary: Answer 2 provided an exact solution to the posed question, but it was a bit tedious to obtain and would not be useful if the system was altered in any significant way, e.g., if the photodiode responsivities were those of a real red-sensitive photodiode. Answer 1 was adequately accurate, despite its simplicity, but not particularly amenable to generalizations. Answer 3 gave an accurate answer and made it simple to get the plot shown in Fig. 3. There is no significant difficulty in generalizing to more realistic scenarios.

Lastly, it is clear that using the decisively polychromatic source in Fig. 1 caused a relatively small reduction in $A_{maximum}$ and the Beer’s law plot is convex, but not badly so. The deleterious effect on spectral resolution was not investigated here, but could easily be done, perhaps as another question.

Not the answer you're looking for? Browse other questions tagged uv-vis-spectroscopy or ask your own question.

1
Is a hue indistinguishable from its equivalent frequency of light?
0
Angle of Light Source for Absorbance Spectroscopy
1
UV Absorption of iodine with some solvent
3
Why we should concern with A∞?
6
Visible Light Spectrophotometer Recommendations