Ask Question
Asked 1 year ago
Active 1 year ago
Viewed 162 times
0
$\begingroup$
Closed. This question is off-topic. It is not currently accepting answers.

Poly(ethylene glycol), commonly known as PEG is non-ionic, hydrophilic, non-toxic, and the most used polymer in wide variety of applications. For example, PEG is the gold standard for stealth polymers in the emerging field of polymer‐based drug delivery (Ref.1). You may find mostly unbiased information about PEG here, which is generally considered biologically inert and safe according to the clinical studies. However, drawback is these studies of clinical safety of PEG are generally based on adults, not children. Nonetheless, at least one study using children have proven it is safe for children as well (Ref.2).

So far, I addressed the suitability of PEG for human consumption. Note that these PEG molecules suitable for human intake have specific lengths such as PEG 3350, which has an average molecular weight of $\pu{3350 g/mol}$ (The structure of PEG is commonly expressed as $\ce{H−(O−CH2−CH2)_n−OH}$). Yet, my argument is if PEG is clear to human intakes, then it should be safer for external applications such as skin creams. To my understanding, among available PEG molecules ($n=1, 2, 3, ..., n$), only toxic one to human is its monomer, $\ce{H−O−CH2−CH2−OH}$ (when $n=1$), commonly known as ethylene glycol or antifreeze. The apperent toxicity of that molecule is mainly due to its enzymatic oxygenation inside the body to oxalic acid, which produce insoluable calcium oxalate crystals.

As you concern, PEG is the basis of many skin creams. An example of PEG derivative used in skin creams is cetomacrogol 1000, which is the trade name for polyethylene glycol hexadecyl ether ($\ce{-O-C16H33}$) with the general formula $\ce{HO(CH2CH2O)_nC16H33}$ (where $n= 2-20$). When $n=10$, it is named Brij56, and when $n=20$, it is Brij58, etc. Another polyethylene glycol ether commonly used in cosmatic industry is Isoceteth-20, which has the same general formula $\ce{HO(CH2CH2O)_nC16H33}$ where $n$ has an average value of 20. The difference between Isoceteth-20 and cetomacrogol 1000 is use of iso-cetyl alcohol instead of cetyl alcohol. Few examples for cosmetics containing Isoceteth-20 are: Nivea, Aveeno, and Nu Skin products, among many others. So, I'd be comfortable with using these products, just based on their reputation.

Now, how PEG is synthesized?

For example, branched PEG haas been recently prepared by Copolymerization of ethylene Oxide and glycidol (Ref.3):

$\mathrm{^{13}C \; NMR}$ of the product mixture shows no presence of unreacted ethylene oxide and glycidol: 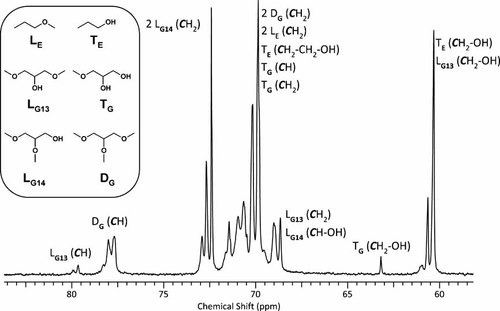