NOTE: As I've been finding new informations about the question, I've been editing the question to keep it up to date. If some comment doesn't make sense just check the Edit History.

DPD (N,N-diethyl-p-phenylenediamine) is used in free chlorine colorimetric analysis since it reacts with Hypochlorous acid and Hypochlorite ions acquiring a pinkish color that can be quantitatively related to the concentraction of those substances if it's inside the working range.

Even though the analysis method is very well documented, I haven't found much about the reaction itself and its mechanism, and since it involves lots of subjects I was recently studying (like the relationship between π-systems and color in organic molecules) I thought it would be interesting.

First taking a look at the indicator molecule: 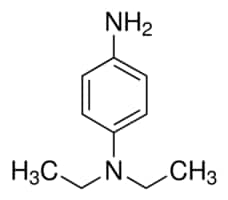 There are two amine groups: a primary and a tertiary one. I don't have software here to run a Molecular Orbital analysis, but I'd guess the amines lone pairs plays a big role in the HOMO (probably the tertiary amine a little more since it's more basic). The carbons in the aromatic ring probably also influence the energy and shape of the HOMO since they are very nucleophilic due to the electron density added by both nitrogens lone pairs to the π-system. I'd guess the biggest contributors for the LUMO would be the hydrogens connected to the primary amine and the ethyl groups connected to the tertiary one, since they are more positively charged due to induction.

The reagent is mostly used in its salt form, as N,N-diethyl-p-phenylenediamine sulfate for example.

According to some sources[1] [2], the final products of the DPD oxidation by the free chlorine are the following ones:

The first one (the free radical), being called Würster Dye, is responsable for the pinkish/magenta color that is used to measure the amount of free chlorine in the solution. The second one (Imine) is colourless, and is favored on more strong oxidizing conditions, reason why the DPD-Method can't be used in very high concentrations of free chlorine.

Sample initially yellowish and photometer baseline set before reaction. After adding DPD the color seemed to be a slightly more bright yellow. Measurement of free chlorine was about 0.35mg/L. 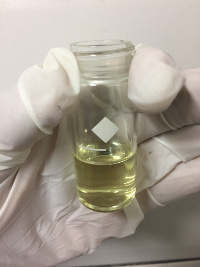 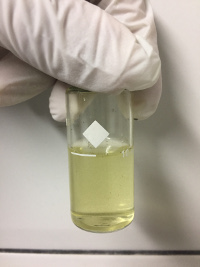 Sample initially colourless and photometer baseline set before reaction. After adding DPD the color changed to a light pink, as expected by the method. Measurement of free chlorine was about 1.50mg/L. 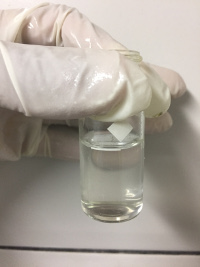 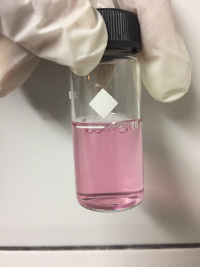 The test confirmed the information on both cited articles that excess free-chlorine would result in the colourless Imine product being favored.

As for the mechanism, I'm still unsure of how it goes. First I thought about an homolytic cleavage of the HO-Cl bond and the N-H bond of the tertiary amine. Later the hydroxyl radical would combine with the hydrogen radical to form water and the chlorine radical would combine with another chlorine radical to form $\ce{Cl2}$. But that doesn't make sense because we would end up replenishing the free-chlorine as the reaction goes. So instead of the hydroxyl radical combining with the hydrogen one, maybe the chlorine radical is the one combining resulting in the release of $\ce{HCl}$. But then we end up with a hydroxyl free radical. It could recombine with another hydroxyl radical forming $\ce{H2O2}$ which would further decompose to $\ce{H2O + O2}$ but it sounds a little odd for some reason. Despite sounding odd it's still the best I could come up with, so I draw the mechanism below:

As for the Imine mechanism, would the following be correct?

I'm not sure about neither, and I'm very confused as how a radicalar reaction takes place instead of the heterolytic one if there's no external influence to favor the formation of a free radical (I always thought we would need UV or a free-radical catalyst to favor a homolytic fission).

As for the HOMO-LUMO gap getting smaller, I guess it makes sense. When we think for example, about the combination of two hydrogen radicals, there's a lowering of the occupied orbital energy. So maybe the formation of a free-radical raises the energy of the HOMO but doesn't raise the LUMO energy of the DPD making the gap between them smaller, reaching visible light spectrum.

So the questions: Are any of those mechanisms correct? If not, what is happening on the DPD/Free Chlorine reaction? Is my reasoning on the HOMO/LUMO gap getting smaller right?

Side-note: The original article that described the DPD method for the first time apparently was this: PALIN, A.T. 1957. The determination of free and combined chlorine inwater by the use of diethyl-p-phenylene diamine.J. Amer. WaterWorks Assoc.49:873. But I'm not sure if there's an open version of it. If there is I couldn't yet find it.

So the hydroxyl radical from hypochlorous acid can form water from the hydrogen on DPD leaving the radical on DPD. This leaves a chlorine radical which can react with another chlorine radical from a second parallel reaction. The resulting molecular chlorine in water forms hypochlorous acid and hydrochloric acid. The net result is the following (the HOCl doesn't normally split to form radicals except by UV photolysis so I show a direct attack instead):

Another way to think about the initial steps in this reaction is as a chlorine substitution reaction that then cleaves into radicals. That is,

Normally chlorine substitution reactions occur with amine groups, but the nitrogen in this case is cationic so the hydrogen is more easily substituted but the chlorine being electronegative doesn't bond well with the cationic nitrogen.

Not the answer you're looking for? Browse other questions tagged organic-chemistry reaction-mechanism color or ask your own question.

8
Reaction mechanism of imine reduction to amine using an aluminium amalgam
4
Why are tertiary alkyl halides obtained in higher yield than secondary or primary during free radical halogenation of alkanes?
14
What's the reaction type of the Hydrogen shift?
6
Diethyl Ether reaction mechanism
17
Can we synthesize alcohols by the photolysis of hydrogen peroxide?
5
Benzophenone Ketyl color origin
2
How does conversion of a free radical to a carbonyl compound take place? Unsure about mechanism
6
Order of reactivity of substrates towards Wurtz reaction