what is mechanism for reaction phenol + dimethylsulphate -> anisole

Dimethyl sulphate breaks the oh bond and forms anisole. How does the reaction proceed?? is it oxygen lone pair attacks on sulphur which has partial positive charge?? the reaction takes place in presence of naoh 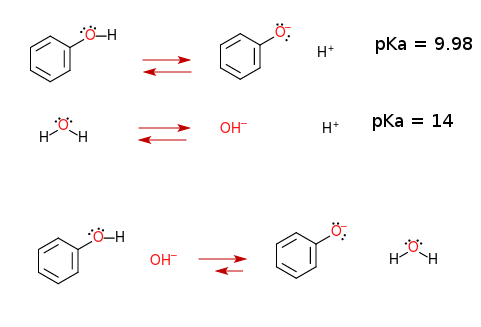 The formed Phenolate is a good nucleophile, and will attack the methyl groups of the Dimethyl Sulfate. Those methyl groups are readily attacked by nucleophiles because of the great induction effect caused by the neighbor atoms which are much more electronegative than the carbon atom, which makes those more positively charged. This makes the methyl groups good electrophiles, hence the reaction name "Electrophilic Methylation": If we focus on the methylating reactant, it's performing an Electrophilic Attack.

Below is the reaction mechanism: 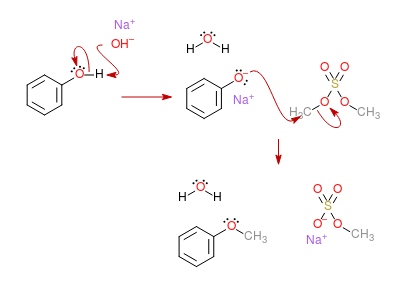 EDIT: Thanks @user55119 for pointing out that only one methyl group of the Dimethyl Sulfate reacts under normal circumstances, requiring 1 equivalent of Dimethyl Sulfate per Hydroxyl Group and not 1:2 as I previously thought

25
Reaction of alcohols with PCl5 and PCl3
0
Reaction of enols with electrophiles
12
Why do tosylation and mesylation of alcohols follow different mechanisms?
2
What happens when prop-2-en-1-ol reacts with concentrated hydrogen bromide
9
Reimer–Tiemann-like reaction of catechol with diiodomethane
5
Why doesn't the bromide anion attack during electrophilic addition of bromine in methanol solvent?
11
Why does a proton prefer to attack a double bond instead of protonating an alcohol in a reaction of unsaturated alcohol with sulphuric acid?