NMR for an octahedral complexes sources of peaks

I wanted to ask a question about splitting pattern in NMR.

I was given the following information to assign to a Compound C and justify why the splitting patterns are as given: 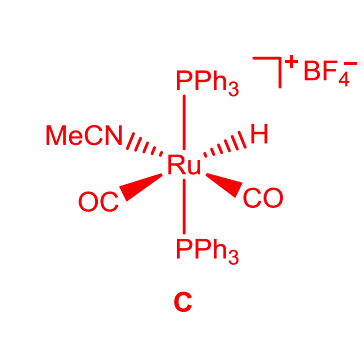 I was confused about both the peaks.

I recall giving a previous question regarding NMR here.

Using the first bit of information

I can't seem to understand why, because there is no plane of symmetry going across the plane of the octahedral 4 ligands (from left to right) so they wouldn't see "the same electronic environment."

Also, regarding the $\ce{^1H}$ I tried to justify this by saying that as there were 2 different $\ce{P}$ atoms in axial but they both faced different environments, the splitting would be triplet too, with the same splitting constant, hence a triplet, but I was unsure about this.

35
Splitting of multiplets in ¹H NMR spectra?
3
Spin spin coupling in a proton NMR of an ester?
5
What is the proton NMR spectrum of p-methoxyphenol?
9
Why does Carbon-13 NMR not have splitting patterns?
3
Axial Equatorial NMR graph difference
1
NMR of trigonal bipyramidal molecules
5
NMR of a bridging Methyl complex
10
How to assign overlapping multiplets in 1H NMR spectra?
1
The type of H-NMR spectra observed for S=PF2H and other inorganic molecules similar to this