What is responsible for the smell of incomplete hydrocarbon burning and what sensor can detect it?

After I pass the smoke from partially burned fuel oil through a filter, I can still very strongly detect the smell. It is the same thing you smell from the exhaust when an old car or truck goes by.

So what is left in this gas that is responsible for this strong smell (and the resulting headache) and what sensors can I use to detect it?

In analytical chemistry, sensors refer to analyte specific devices, e.g., glucose sensors, pH sensor etc. Smell on the other, generated by a burning complex mixtures such as fuels can rarely be associated with one compound. People have spent their life (e.g. Alan Marshall) studying the constituents of fuels. There are literally thousands and thousands of compounds.

However, if you were in a research lab investigating odors, you would be using something called as a olfactory gas chromatography technique. There is a chromatography column which separates all the gaseous/volatile components and a scientist puts a nose at the end of the column and records the "response". Later you can identify that particular odor by a mass spectrometer.

In short, there is no sensor per se. You need a instrumentation which would fit in a kitchen sized area to determine what causes that particular odor after burning an extremely complicated mixture such as fuel oil. 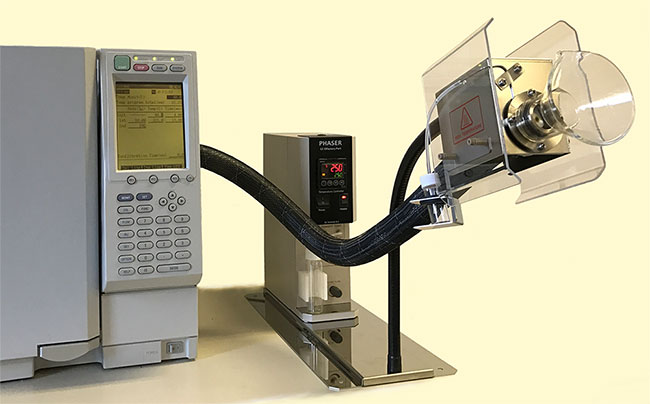 3
What is the best way to detect the presence of tear gas?
13
Flame test: Is the metal atom or the metal ion responsible for the flame colour?
0
ICP-OES data treatment: correct for dilution and inweight, the units
2
What is the mechanism for electrospray ionization?
1
What analytical method(s) to use for finding the contaminations in a fatty base material
11
What equipment is used for two-dimensional IR spectroscopy and how can the molecular structure of a compound be resolved?
6
Which compound is responsible for the borax bead test?
0
When will the Lassaigne's method for detection of nitrogen and Kjeldahl's method for quantitative estimation of nitrogen fail?