cis-2-Aminocyclohexanol on treatment with nitrous acid undergoes a pinacol rearrangement, yielding both cyclohexanone and cyclopentylmethanal as products.

However, it goes on to state that the trans epimer would specifically yield the latter as the major product. Can someone explain this (preferably via mechanism)?

Quite a fun one to work out. The first thing to know is that there is a stereoelectronic requirement for the migrating group to be anti to the leaving group ($\ce{N2+}$), for orbital overlap reasons. 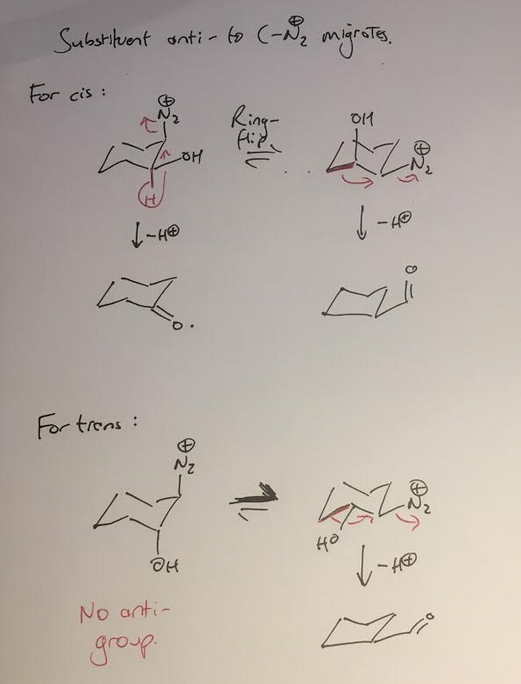 (apologies for hand-drawing - doing this on my phone)

You need to consider the chair conformations of both stereoisomers, in both possible ring-flip forms. For the cis stereoisomer, you would expect roughly a 1:1 mixture of ring-flip forms. When the $\ce{OH}$ is axial, the group anti to the LG is H, and the cyclohexanone is formed. Similarly, when $\ce{OH}$ is equatorial, the $\ce{C-C}$ bond is anti and the cyclopentane product is formed.

Now, for the trans-isomer there are two factors favouring the cyclopentane. First, the chair form in which both groups are equatorial will predominate, and this is the stereoisomer that leads to the cyclopentane. Secondly, in the (minor) conformer where the $\ce{OH}$ and $\ce{N2}$ are axial, there is no anti group to migrate according to the normal mechanism. The OH itself is anti to the $\ce{N2}$, and I'm not aware (off the top of my head) of any examples of 1,2-hydroxy shifts. However, I expect some epoxide might be formed via an SN2 pathway.

I took the opportunity to read the McCasland paper1 to which the OP's link referred. The products were isolated as their 2,4-dinitrophenylhydrazones. In the case of the cis-isomer 4, the reaction mixture was "apparently richer" in the aldehyde 3.
As @PCK has argued for the trans-isomer 1 the highlighted bonds are aligned properly for a ring contraction. Clearly, the diaxial conformation of 1 is not a factor.
Assuming that the diazonium group has an A-value similar to that of cyanide (0.2 kcal/mol; OH, 1.0 kcal/mol), the equilibrium constant for the two cis conformations at ambient temperature is 3.8, which favors conformation 4b. If indeed the formation of aldehyde 3 predominates over cyclohexanone 5, then hydride migration must be a slower process than ring contraction. In the event, orbital overlap of the red bonds in 4 is essential.

Not the answer you're looking for? Browse other questions tagged organic-chemistry rearrangements or ask your own question.