What reagents or series of reactions would allow for selective hydroxylation of an allylic methyl group outside of a ring? 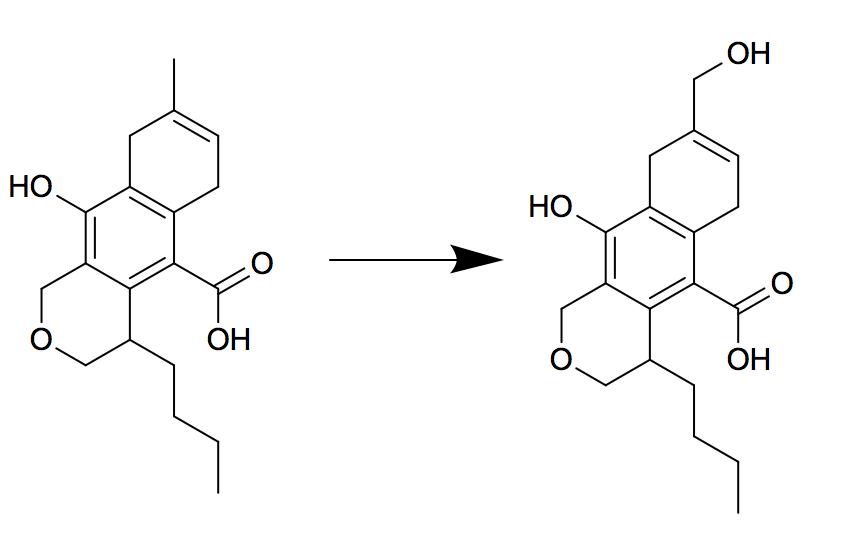 Sample transformation for selective hydroxylation of an allylic methyl group outside of a ring. Selenium dioxide would not work since hydroxylation would be favored inside the ring.

As has been stated by @Beerhunter those benzylic hydrogens are a serious concern . Nonetheless, here is a different offering. To solubilize carboxylic acid 1 both the phenolic group and the acid should be protected. Here, both of the groups are protected as methyl groups. [An ester group and silylated (TBS?) phenol would also suffice.] The double bond of 2 is epoxided to 3. The critical step is the isomerization of the epoxide to an exo-methylene allylic alcohol. There are several reagents that do this transformation. Yamamoto1 has shown that methyl groups are more reactive than methylene groups with the epoxide rearranging reagent diethyl aluminum 2,2,6,6-tetramethyl piperidide although no benzylic methylene examples were provided.

Acetylation of the allylic alcohol affords allylic acetate 4. Grieco2 has reported that bis-acetonitrile PdCl2 isomerizes allylic acetates to their tautomer in what is an equilibrium reaction favoring the more stable isomer. In this instance, the trisubstituted, endocyclic double bond compound 5 is expected. The remaining steps involve removal of the protecting groups of choice to afford the target 6. 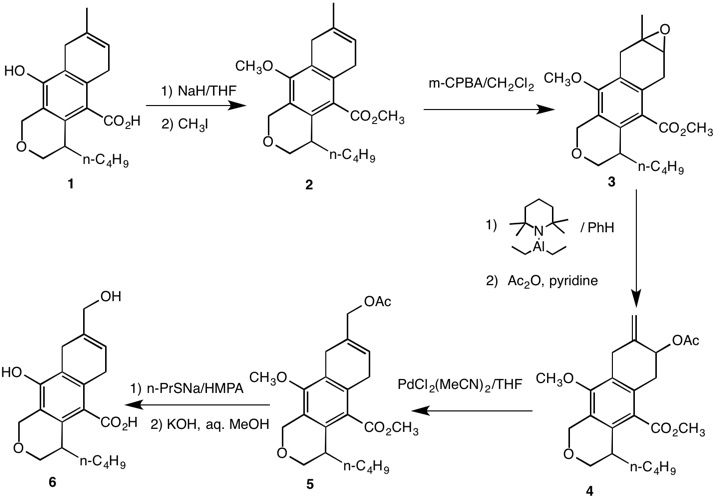 The methods required are generally outside of the mainstream lab chemistry, but that does not mean they can't be used in lab setups.

As Waylander states, use of oxygen with acetic acid can be catalysed to acetyloxylate the molecule. Then the acetate ester is simply cleaved.

The main issue in this molecule is the activated benzylic position. These are usually prone to oxidation without trying. So most methods suggested may also functionalise this benzylic position too: Radical bromination with NBS and an initiator; biocatalysts; singlet oxygen.

If bromination is used, one could deliberately exhaustively react until the allylic position is functionalise, then selectively reduce the benzylic position - this is possible using catalytic hydrogenation or transfer hydrogenation through careful catalyst and condition selection.

A bit more fiddly is using singlet oxygen. The best method to use this is through flow rather than batch methods (also safer). However, formation of allylic hydroperoxides from allylic functionality is well documented. A reductive step then needs to take place to yield the alcohol. Sulfides and triphenylphosphine are usually cited but other methods are possible.

All the methods above are at least two steps though apart from biocatalysis.

Not the answer you're looking for? Browse other questions tagged organic-chemistry synthesis organic-oxidation or ask your own question.

4
How could you accomplish the following transformation in sufficient yield?

5
How to synthesize cyclopentane from cyclohexane?
4
Synthesizing 2-methyl-2-butanol
6
Why is benzyl alcohol a slightly stronger acid than cyclohexanol?
1
How to determine the stereochemistry after elimination of anti-1-bromo-2-methylcyclohexane?
1
Why should ether O be named as OXA in a bicyclo ring when it is a substituent?
5
Epoxidation with peroxyacids