Why the bond angles of crystalline compounds uniform while in the amorphous state the same compound has non uniform bond angles?

A requirement to qualify as crystalline, you need predictive patterns both in short, as well as in long distance range. In other words, there is a smallest structural pattern (unit cell) describing all atom's relative position well enough, which then is only replicated by translation. Which is the case in crystalline state (e.g., quartz, or sodium chloride), but not in the amorphous state (like glasses in general, not only quartz glass or glass in the windows).

However, it seems good to add some grains of salt:

The variation in bond angles is much less than in the OP's diagram. Here is a bilayer of quartz observed under a scanning microscope: 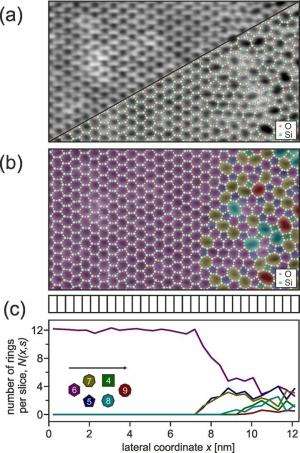 It shows a transition from crystalline (left) to amorphous (right). In the transition, the number of rings with six silicon atoms decreases in favor of some with seven or five, mostly.

The amorphous form has higher potential energy (some bond angle strain) and I guess higher entropy. Glasses are metastable, meaning that the crystalline form is thermodynamically favored, but the kinetics of reaching it are very slow.

22
Are there any ionic amorphous solids?
1
Why do amorphous substances have different values of physical properties in different directions?
6
How can diamond have a fixed refractive index?
3
Why some compounds form different crystal structure at different temperature?
5
What is crystallographic equivalence?
0
Why does crystalline solids have well defined 3d geometry
2
DSC Metal hysteresis (melt/cryst)
7
What is the reason for isotropy in amorphous solids?