FMO analysis of the [3,3] Sigmatropic reaction regarding geometry. Is it accurate?

While studying the reasons behind the stereospecificity of [3,3] Sigmatropic reactions, I ran into an image portraying both possible transition states for the reaction: The Chair TS and Boat TS. The complete FMO orbitals were only drawn for the Chair TS and the final geometries of the products was shown for both transition states: 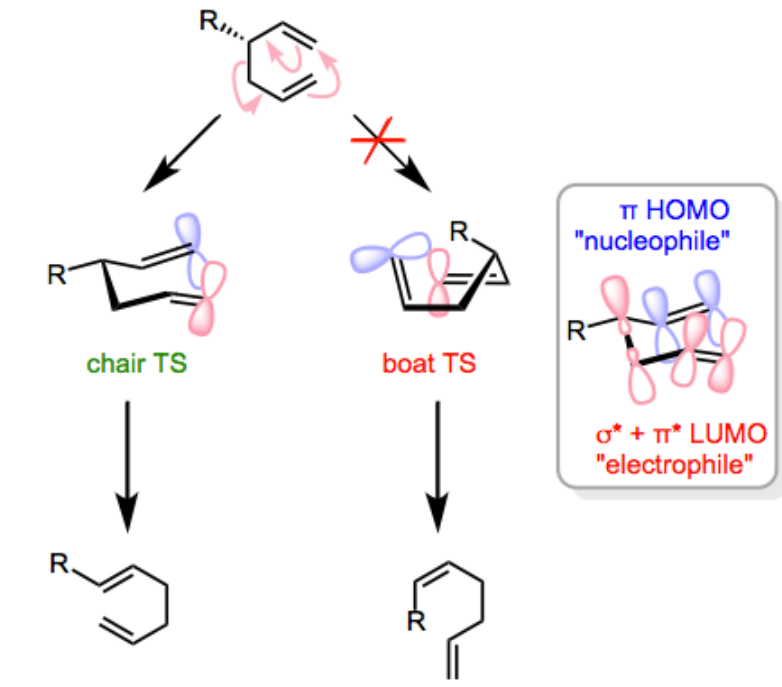 I find it a little bit hard sometimes to visualize the three dimensional transitions that result in a specific configuration, so I tried to complete the FMO analysis with the orbitals for the Boat TS and to draw the sigma-bond rotations necessary to create constructive overlap between the lobes. I came up with the following: 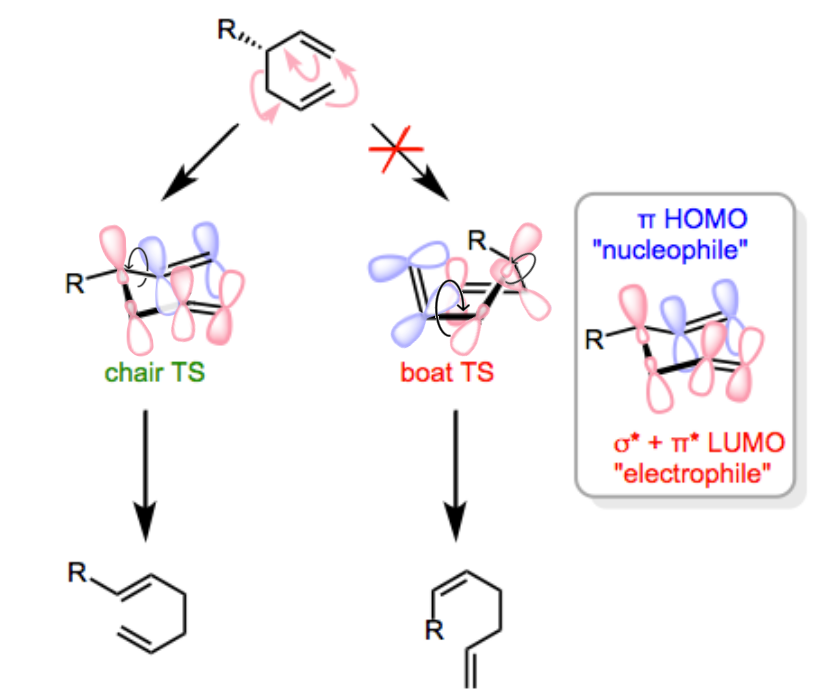 On the Chair TS we see the σ* shaded lobe is perpendicular to the shaded lobe of the π HOMO from the double bond next to it (having a 3D model would make it easier to see because in the drawing they seem aligned, but they are actually perpendicular). The sigma-bond would then have to rotate 90º inward for effective constructive interaction, "throwing" the R-Group outwards and resulting in the E-configuration seem in the product. The other σ* lobe also rotates 90º in the same direction (I forgot to draw the arrow there, but it would be the same as the one beside the shaded lobe), but for some reason this rotation result in the regular "cyclic-like" geometry for that double bond (Z-configuration?).

If it wasn't hard enough to visualize it on the Chair TS, it gets worse on the Boat TS. I came up with the orbital configuration as seem in the image. First, I got a little confused about the σ* shading, because the whole premise for the shading had to do with constructive overlap where the double bonds would occur. But there I had to draw opposite phases on the lower part. That, I believe, is because initially they were aligned with the same phases (as in the Chair TS), but the conformation twisting threw the constructive phases in opposite directions. Anyways, to reach constructive overlap the sigma-bond next to the substituted carbon would have to rotate close to 90º counter-clockwise, while the other sigma-bond would have to rotate almost 180º. That explains why this transition state is so unfavorable, but I'm still struggling a bit with the geometry. The 180º rotation sounds like it would result in the unsubstituted double bond pointing out of the "cyclic-like" shape as seem in the product. But I can't clearly see how the 90º rotation throws the R-Group inward in a Z-configuration geometry. Instead, I came up with another orbital configuration possible that might be the correct one: 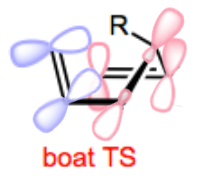 In that orbital configuration the sigma-bond of the substituted carbon wouldn't have to rotate, and we would have the R-Group pointing inward like in the product.

Which orbital configuration is correct, if any? Is my reasoning about the sigma-bond rotations and the resulting products geometry correct? Do you have any tips when it comes to visualizing geometrical issues on more complicated molecules?

For chair-like transition states the angle at which you draw your chair can make a significant difference to how easy it is to visualise stereoelectronic interactions. Sadly, there is no real way to know which is the best way to draw it, except by either trial and error, or prior experience (or leveraging on other people's experience, i.e. copying it from somebody else!).

If you rotate the chair a bit so that the forming bond is in front (as opposed to at the side), then you can have something like this:

You don't need to overthink how the sigma bond rotates; this is a sigmatropic rearrangement, not a electrocyclic reaction where there are conrotatory/disrotatory modes. The geometry at the substituted carbon definitely changes (from tetrahedral to trigonal planar), so there is some kind of "flattening" as the reaction proceeds, but all you really need to pay attention to is the relative disposition of the R substituent and the rest of the carbon chain: here they are clearly trans to one another, which is an (E)-alkene. This is stereospecific, so if you start with the conformation shown in the left, you will end up with a trans alkene. There isn't a different "rotation mode" that leads to the cis alkene.

The main way of getting a cis, or (Z)-alkene, is not actually via a boat TS, but rather via a chair TS with the R substituent axial instead of equatorial. Note that this is a different conformation from the previous image, so again it's not about which direction the sigma bond rotates in, but rather the original location of the substituent (axial/equatorial). The orbital diagram is exactly the same, so there's no need to redraw it, but it should be easy enough to see that this leads to the reverse stereochemistry.

The boat TS is trickier to draw. This is my preferred representation:

but I am not entirely sure which TS is higher in energy (i.e. whether the substituent prefers to point up or point down), even after consulting several references. I don't think it's a matter of great significance; after all, the boat TS usually only plays a very minor role, as far as I know.

Not the answer you're looking for? Browse other questions tagged organic-chemistry stereochemistry molecular-orbital-theory pericyclic or ask your own question.

40
Why do SN1 and SN2 reactions not occur at sp2 centres?
1
How does hyperconjugation lead to the directing properties of alkyl group?
13
Photoisomerization of Azobenzene
11
Why is the eclipsed conformer more stable than the bisected conformer in 1-butene?
4
When 3,4-dimethyl-2,4-hexadiene reacts with HBr what is the major product?
14
Explanation of the strength of phosphorus–oxygen bond
10
Frontier orbital analysis of zinc-catalysed carbonyl-ene reaction
6
Explanation of the orbital energies resulting from Jahn-Teller distortion of octahedral complex using MO theory