Why do H₂ and O₂ create H₂O?

Both $\ce{H2}$ or $\ce{O2}$ are stable molecules. However when given energy they heat up and form $\ce{H2O}$. My teacher explained that the increased energy breaks the bonds, allowing new ones to form. However, why don't the old forms reform instead? Why are new bonds created? 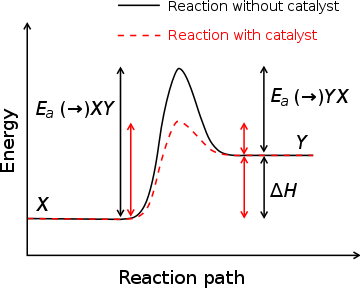 In this picture, the $H_2$ and $O_2$ are on the right side of the curve. Just like water in the above analogy, they'd like to move to the lower area, but first must be brought up over the bump. So some energy must be added to accomplish this, and then they end up in the much lower energy position on the left.

Once over the bump, they stay as $H_2O$ because that is the state they'd like to be in at any time, but were prevented from being in before by the activation energy bump.

Adding on to DaleSwanson's correct answer: The ball-and-hill analogy is just saying that a ball will roll down a hill. This is because if the path is available it will find a way to the bottom of the hill due to there being less potential energy in the ball down at the bottom than up at the peak. Think of the activation energy as the little 'push' needed to get the ball moving off the edge of the cliff, once it is nudged off the side it will release almost all the potential energy that was released through kinetic energy when it hits the ground (small amounts of potential energy will also be released in other forms, i.e: friction of the air and ground).

To answer your question, I ask you this: you accidently knock a pen off your desk, it required so little energy it was almost unnoticeable. Would it require more energy for you to reach down and put the pen back on your desk? What position is "more stable" for the pen?

It is very possible to calculate the energies of the bonds and compare the energies of the reactants to the products in the balanced chemical equation by looking up heat of formation's for these species, and calculate the change in energy from going to reactants to products. That is, we can calculate how much energy is released when two moles of $\ce{H_2O}$ are created from this reaction.

Now using the analogy you have learned, would it be reasonable to say that an equally small nudge that caused the ball to fall would be enough to cause the ball to rise up back onto the peak of the hill? You tell me.

A better picture of the path from reactants to products would be different than a smooth 2d hill picture. Sure, the change in energy is not as outrageous as I portray it, and perhaps in some miraculously rare situation some invaders from another country find the ball at the bottom of the hill, they put it in a catapult and launch it at their enemies at the top of the hill. This is extremely rare and very situational. In other words there is almost no chance it will happen. As it turns out, you are thinking very rationally when you ask why the reverse process does not happen! The problem is you have to think on the molecular scale where molecules are colliding into each other. It is very likely that a $H_2$ will collide with the $O_2$ and one side of the oxygen breaks into the bond of the hydrogen and you now have $H_2O + O$. But how would seperate $H_2 + O_2$ form from two $H_2O$ colliding, the answer is that it is just extremely unlikely, it would more likely create $H_2O_2 + H_2$ if at all! There are other steps in-between that would need to account for going backwards in the reaction. You can think of this as a separate path around the hill. There are more ways back up the hill in other words, but they may lead to dead-ends!