How to explain disagreement between Le Châtelier's principle and the simplified Gibbs free energy equation?

For example, for the dissolution of a salt in water that is exothermic, heating the solution would drive the reaction towards the solid form of the salt according to Le Châtelier's principle.

However, according to the simplified Gibbs equation $(\mathrm dG = \mathrm dH - T\mathrm dS),$ the reaction would be spontaneous towards the products due to the increase in entropy and the negative enthalpy.

To me, these seem to contradict each other. How is this reconciled? Am I making a mistake somewhere?

The primary flaw in your reasoning is assuming that $K$ is proportional to $-\Delta G^\circ$, so that a reaction with $\Delta S^\circ >0$ and $\Delta G^\circ<0$ must have a larger $K$ at a higher temperature because $\Delta G^\circ$ is more negative. If that were true, we would have a relationship of the form $\Delta G^\circ = -cK$, where $c$ is a constant. Instead, the key relationship is

From that equation, hopefully it is clear that if $T$ increases (which reduces the magnitude of the $\frac{\Delta H^\circ}{T}$ term), $K$ will only increase if $\Delta H^\circ > 0$. If $\Delta H^\circ < 0$, K will have to decrease with increasing $T$ to maintain the equality. $\Delta S^\circ$ is a constant term that does not affect the change in $K$. Thus, our result is completely consistent with both Le Chatelier's principle and with the van't Hoff equation analysis.

The dependence of an equilibrium constant on temperature is given by the van't Hoff equation:

Therefore for an exothermic reaction ($\Delta H^\circ<0$) you expect a decrease in $K$ with temperature, as Le Châteliers principle would predict.

To give an example, the following figure displays solubilities for LiCl at different T, obtained via PubChem, and the associated values of $\Delta H^\circ$ obtained from the slope using the van't Hoff equation. Note that the increasing positive slope indicating an increasing solubility is also consistent with an increasing value of the positive (endothermic) enthalpy. 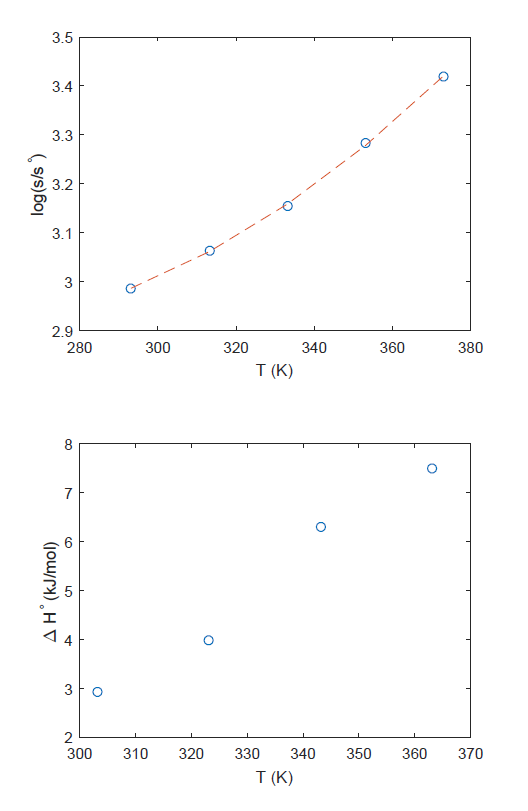 Using the values of $\Delta H$ derived from an analysis based on the van't Hoff equation is a form of self-fulfilling prophecy: the van't Hoff expression can't fail, because it's a way to derive $\Delta H$ for the process from the temperature dependence of $K$. Of course $\Delta H$ has an independent meaning, and values can be provided by calorimetry, but the point is that van't Hoff's expression will make correct predictions provided you use the right value of the enthalpy. van't Hoff's equation will not predict the behavior expected according to Le Chatelier's principle if you use the wrong $\Delta H$. In particular, you should not use the value for the limiting (infinitely dilute solution) heat of solvation if attempting to predict how temperature will affect solubility. Rather you should use the value associated with transferring a solute molecule into a saturated solution.

Andrew gives the right explanation on how to interpret the standard expression for the Gibbs free energy in terms of enthalpy and entropy (multiply it by $-1/T$).

I think I misunderstood the original question, and Andrew nailed the answer because he saw where the confusion lay (it has nothing to do with van't Hoff's equation or the particular value of $\Delta H$).

I leave the following comment which I included in my original answer but it is no longer valuable as a clarification on how to reconcile the apparent contradiction.

The expression for $dG$ you provide is derived from the definition of the Gibbs free energy $$G=H-TS$$ by imposing the condition of constant temperature, and so is applicable only to a process carried out at constant T. This leads to

with the values of $\Delta H^\circ$ and $\Delta S^\circ$ specific to the specified T. Sometimes these values are weak functions of T, but not necessarily.

Note: This answer has been heavily edited, because the original answer I posted contained some assumptions and was very limited (and incorrect) in the analysis. I would like to highlight the patience of @Buck Thorn, @Andrew and @Karsten Theis in pointing out my errors, expanding the discussion and going into a lot of detail.

The trouble is not with any inconsistencies in your analysis. The difficulty is actually in finding consistencies in the behaviour of ionic compounds when they dissolve.

For compounds with low solubilities (and endothermic enthalpies of solution) like silver(I) chloride, using either the van't Hoff equation or Le Châtelier's principle are consistent with observations. That is to say, that solubility (and the associated equilibrium constant) increases with temperature.

The equilibrium for the dissolution is:

We can write the following equilibrium:

Gibb's free energy and equilibrium are related by

The trouble starts when we try to apply this type of analysis to compounds that are very soluble in water. 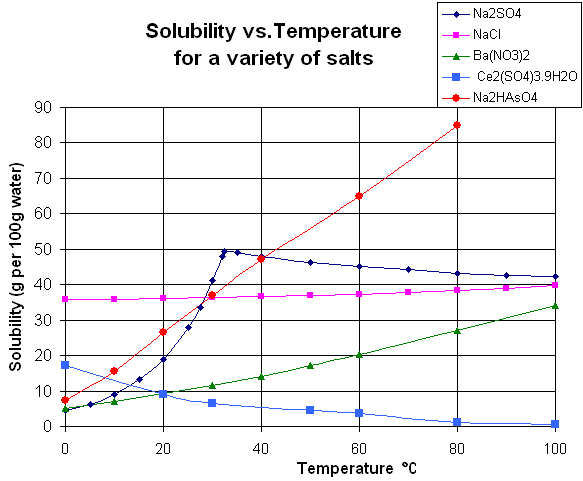 As pointed out in this question and this question there are often multiple factors at play when an ionic compound dissolves in water. With large solubilities, the values of the $K_{sp}$ are considered unreliable, which might explain discrepancies between experimental and calculated results.

So, the answer to the question is that it depends. Some soluble salts will obey Le Châtelier's principle and the van't Hoff equation accurately predicts their solubility behaviour, but others do not (sometimes quite spectacularly). In those cases a closer look at the specific circumstances surrounding the dissolution of that compound in order to understand what is happening.

Not the answer you're looking for? Browse other questions tagged physical-chemistry thermodynamics equilibrium free-energy or ask your own question.

11
Why does sodium sulfate have an unusual solubility-temperature curve?
3
Why does the solubility of LiCl increase with temperature if the dissolution is exothermic?

9
Spontaneity of an exothermic reaction when temperature is decreased
5
For a system to undergo a spontaneous change at constant temperature and pressure the Gibbs free energy must decrease, but how?
2
Understanding Gibbs free energy
4
Relationship between Gibbs free energy, enthalpy, entropy and rate of reactions
2
Solubility increases as Temperature increases.. Ks increases with temperature meaning dissolving is endothermic... But what about NaOH?
9
Le Châtelier's Principle and heat
3
Change in enthalpy and entropy when sugar dissolves in water
1
Can endergonic reactions be driven by heat?