Where does the energy come from to lower the temperature of a brine solution?

Suppose I have a densely packed bucket of ice chips / cubes made from pure $\ce{H2O}$. It has been at room temperature for days, so the interior temp of the ice is likely close to 0 °C / 32 °F. (I have a working model of this in a clear ice - ice maker in a kitchen that does not have refrigeration; the ice is kept cold solely by the continuous addition of more ice.)

To a measured quantity of that ice (think about an ice bucket to cool wine) if I add:

The temperature of the resulting solution declines to roughly -22 °C / -8 °F.

I know that the $\ce{NaCl}$ depressed the freezing point of the water and that is why it can be liquid at this temperature. I suspect that $\ce{NaCl}$ is forming ions in the solution.

The minimum temperature reached should be −21 °C at 29 % NaCl. Initially suppose that the ice, water and water vapour are at 0 °C in a thermally insulated container. Say point A in the figure and some salt is now added.

This is the eutetic point (point E) and equilibrium has been reached. The temperature falls because for a phase change to occur the ice uses the heat of fusion it needs to melt by drawing that much heat from its surroundings.

Many other salts can be used instead of NaCl, such as ammonium chloride and calcium chloride. 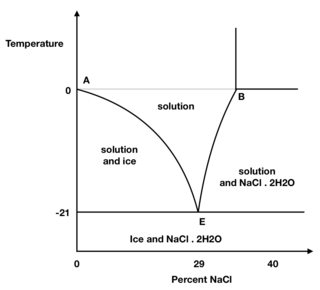 In contrary to mixing/dissolving salts with/in water, doing the same with ice instead works with much less total thermal energy.

Water molecules in saturated solution at ice/salt contact have lower chemical potential than in ice, so ice is dissolving with expanse of lowering molecule kinetic energy and therefore temperature.

In order to decrease the temperature of a sample, you don't need any energy. It is the opposite, you have to lower the kinetic energy. So the question becomes where does this energy go.

The answer is given by Poutnik: Some of the ice melts, and that takes energy.

What drives this process?

In ice, water is in a pure state. In the liquid state, water is either pure or mixed with sodium and chloride ions.

After adding salt, some of the ice melts quickly, driven by the entropy of mixing. Once the temperature has dropped sufficiently (and the salt concentration has decreased because of the additional liquid water), the system is at equilibrium again. At that point, the ice slowly melts and the temperature slowly increases as the concentration of salt decreases.

49
Why does ice water get colder when salt is added?
1
Freezing Point Depression and Temperature Decrease
0
Mechanistic explanation of salt lowering temperature of ice slush
-3
What in salt makes ice unable to refreeze?
0
Why does the non-volatile solute go into the liquid part of the the solution when a solution containing non-volative solute is freezed?
0
What is the effect of impurities on ice?