While studying Molecular Orbital Theory, I ran into a comparison of basicity between pyridine and piperidine. The latter was concluded to be more basic because of the sp3 hybridization of the positively charged nitrogen opposed to the sp2 hybridization of the pyridine nitrogen. The p orbitals are higher in energy, hence, the higher the p influence on the final hybrid orbital the bigger it will be in energy. Higher energy orbitals result in higher stability for positive charges. 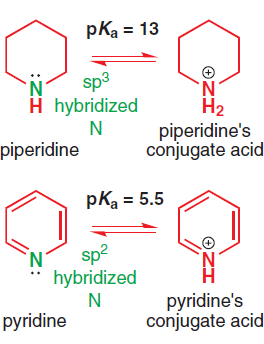 On another moment, when reading about carbocation stability, it was stated that tertiary carbocations are more stable due to the delocalization of the positive charge.

Both statements regarding the positive charge stabilization makes sense, but here's where I started getting confused: 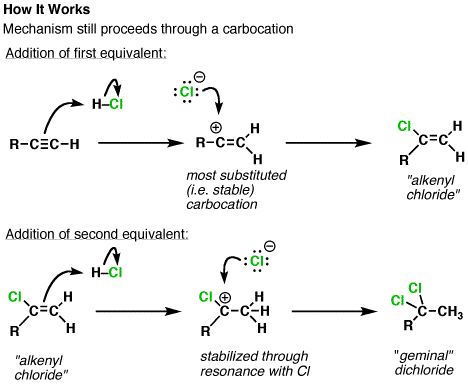 Could someone give me a light on those matters? I assume I might be making a confusion regarding the carbocation hybridization of methylacetylene, would the secondary carbon have a sp geometry when it's positively charged?

molecular-orbital-theory stability resonance carbocation
share|improve this question|||||
asked May 29 '19 at 3:03

Basicity is the ability to donate a pair of electrons. In the case of pyridine, the lone pair is in a sp2 orbital. This orbital does not participate in any resonance, and is smaller than the sp3. This means the electrons will be closer to the nucleus due to stronger attraction, making the pyridine a weaker base, since it's harder for it to donate these electrons.

Tertiary carbocations are more stable, that is correct, but you should look closely on what that means. A tertiary carbon is carbon atom that is to 3 other alkyl groups , not just any other atom. Alkyl groups are weak electron-donating groups, therefore stabilizing the carbocation, because they increase the electron density in the electron-poor center. That is why according to Markovnikov's rule, the electrophile, in this case the proton, will bond to the less substituted carbon - in order to create a more stable secondary carbocation, which the nucelophile (the chloride) will attack.

Not the answer you're looking for? Browse other questions tagged molecular-orbital-theory stability resonance carbocation or ask your own question.

11
Resonance in carbocation derived from allenes
3
Orbital Electronegativity Considerations in Resonance Structures
11
Is s-p mixing referring to hybridization or is it the mixing of one atoms s orbital with the other's p orbital?
8
Is the hybridization only related to atomic orbitals but not to the molecular orbitals?
12
Are carbocations necessarily sp2 hybridized and trigonal planar?
18
What exactly is “B-strain”?
4
Stability of canonical forms
3
Does hyperconjugation into sigma-star explain methylamine's increased basicity relative to ammonia?