Why is the dissociation reaction of acetic acid in water initially endothermic and then exothermic?

My understanding from Le Chatelier's principle is that a rise in temperature "adds" heat to the system and a drop in temperature "removes" heat from the system. Correspondingly, a temperature increase would favour the endothermic (heat absorbing) direction and a temperature decrease would favour the exothermic (heat releasing) direction. Why is this contradiction? My thoughts are that maybe the autoionisation of water is endo or exo, which somehow dominates the reaction, but I don't know. Could someone please provide a possible explanation? 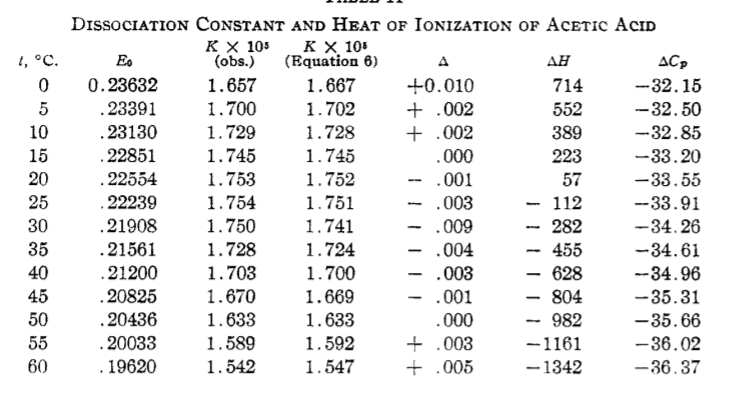 I have found a paper which does this same experiment and provides a discussion of this phenomenon[1]. I will begin by just quoting from the discussion section:

It has been stated in the introductory section that a maximum in the formal Cp° for a pair of thermally stable free ions can be ascribed to an endothermic change in the solvent shell around one of the ions. However, the physical description of that change can cover a wide range of phenomena. At one extreme, the change might be a genuine chemical reaction: for instance, an octahydrate becomes a hexahydrate. At the other extreme, it might be merely an artifact resulting from a peculiar energy level diagram for a single species.

Intuitively, one would expect the reaction to stay either endothermic or exothermic with only small changes due to the relative thermal populations of various vibrational modes in the reactants and products. This picture is more relevant to the gas phase. Thus, the authors are stating that this kind of large change in the behavior of a reaction must be related to the environment which each ion experiences, namely, the solvation environment.

The authors go on to give diagrams for each of the cases they describe above. They stress that in the case where a genuine chemical change occurs, you are essentially moving from populating one set of states to another set of states entirely.

On the other hand, and I suspect this is more commonly the case when water is the solvent, the density of states might increase quite markedly as energy increases. That is the solvent may begin exciting librational modes quite strongly or even move to a regime where the solvents can more or less freely rotate. This behavior of the solvent would be very sensitive to temperature. The authors are very careful to note that each of these situations can result in the same thermodynamic outcome, so one can determine which is happening on the basis of thermodynamic data alone. Nowadays, we could easily run a molecular dynamics simulation or carry out some kind of 2-dimensional IR experiment and extract meaningful kinetic information to supplement the thermodynamics.

So, to summarize, this large change in enthalpy which crosses from exothermic to endothermic is almost certainly due to large changes in the solvation environment and not large changes with respect to the reactants and products.