What actually happens when 'energy is released'? [duplicate]

Thermodynamics classes and equations always discuss a chemical reaction in the form of energy being released or absorbed. This is always hand-waved as just 'energy' from the surroundings.

When 'energy is released' on a bond being formed, does the new species then have a greater kinetic motion than the combination of the two species alone? Does this energy somehow translate to a change in energy level of an electron and a release of a photon at the subsequent decay?

physical-chemistry thermodynamics energy
share | improve this question | |
asked May 24 '19 at 20:43

Thermodynamics works perfectly well by assuming that matter does not need to be made of discrete particles, i.e atoms and molecule are not necessary. It was developed before the structure of atoms and molecules were known so it cannot inform us about anything at a molecular level. It is concerned primarily about energy and entropy.

If you break a bond in a diatomic molecule then all that can happen is that the two atoms move away from one another with the excess energy used to break the bond shared between the atoms in the form of kinetic energy. The 'excess energy' is the energy above the dissociation energy. The atoms will be 'hot' and if in a gas (or solvent) of inert molecules will collide with these and their energy will be spread out among all the molecules raising the temperature by just a little bit.

In a polyatomic molecule if the products are lower in energy than reactants the excess energy will raise the temperature of the surrounding solvent or gas. To break a bond the activation energy has to be overcome, once this happens the product has more potential energy than the reactant, i.e. more vibrational and rotational energy levels are populated than in the reactant, see figure. This is because the potential well of the product is lower than that of the reactant. At the top of the activation barrier is the transition state.

Once in the product potential the extra energy is lost quickly, a few picoseconds, to any solvent surrounding the molecule. Energy is also lost to other vibrational /rotational energy levels in the product molecule. These are vibrations not involved in the bond breaking. Eventually all this energy is spread out in the surrounding solvent (or gas) raising its temperature. The kinetic energy change in a reaction may not be that large if the energy is taken up by the vibrations and rotations. This is unlike the case when an atom is formed as a product. 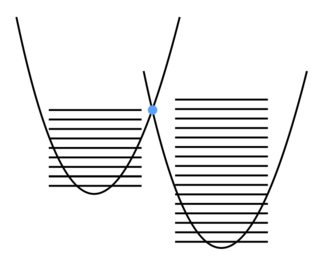 The figure shows how the product has more vibrational energy than the reactant after surmounting the barrier and transition state (blue dot) which is the energy and coordinates at which the molecule changes from reactant to product. The energy difference, leading to heating, is that between the two lowest energy levels in each potential.

Not the answer you're looking for? Browse other questions tagged physical-chemistry thermodynamics energy or ask your own question.

2
How is heat physically released in an exothermic process?