Extraction between cyanex 923 and phenol

I want to remove phenol from wastewater so I used the cyanex923 as an extractant or carrier to extract phenol from the wastewater (the name of the process is non-dispersive solvent extraction) but the problem is that I don't know what to do at the last step when the complex cyanex923-phenol is formed. I know that I need a stripping step to separate these two components and when I googled, I see some people said that NaOH can be used and some people said NaCl but I don't know exactly how it works, like what happens when NaOH or NaCl is added, please can anyone help me to explain the process because I'm totally lost

So far as I can see from Google, Cyanex 923 is a liquid mixture of trialkyl phosphine oxides. This should be soluble in the standard range of organic solvents (ethyl acetate, diethyl ether, methyl t-butyl ether) so washing a solution of the cyanex923-phenol complex with aqueous sodium hydroxide will remove phenol without the cyanex going into aqueous. Usual drying, filtration and solvent evaporation under reduced pressure will give the cleaned cyanex

Based on the original question, I can only speculate if further detail about the composition of cyanex923 may be helpful for the OP, or not.

Beside cyanex923, sibling formulations cyanex925, 921 and Topo -- at time of the study all tradenames of products by then American Cyanamide Company (defunct since 1994) are equally surveyed. 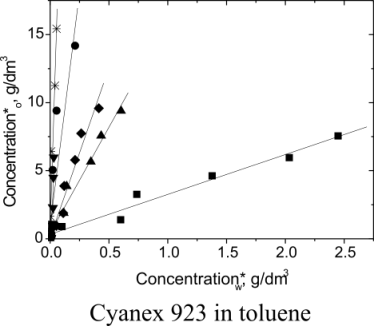 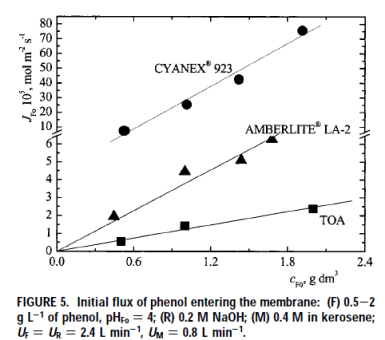 After I've done some researches I think it works like the following:

This means that at the interface cyanex is regenerated and recycled back to the extraction module. The solute (sodium phenolate) is then released into the aqueous stripping solution. I'm not sure what they mean by "the aqueous solution" but anyway, we have the PhONa and need to be converted back to the phenol so that we can use phenol again and I think we can do it in acidification condition.

Some study researches mentioned that we can add HCl to lower pH and when the the pH drops the phenol associates and forms an organic phase separated from a saline aqueous phase.

This is what I've understood from some articles that I've read, please correct me if I'm wrong

Not the answer you're looking for? Browse other questions tagged phenols or ask your own question.