How would this reaction look like in a potential energy diagram? (SN1 Reaction)

My task is to explain, why molecule A reacts in a SN1-reaction faster than molecule B.

(I would do this by comparing their potential energy diagrams)

My idea is to have a closer look at the reaction mechanism at first: 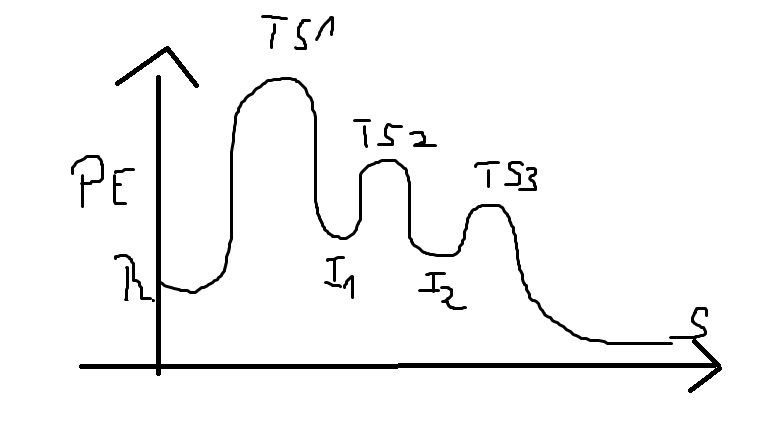 TS1 is here the intermediate with the carbo-cation. That's the step, where the reaction is slow, where one needs a lot of energy to remove the Bromine. Maybe I guess one does not need this lot of energy in molecule A compared to B because the Bromine is in the background (trans- isomer) there and not in the foreground? Furthermore, in SN1 reactions the reaction rate is determined by the substrate (the first step). So, the activation energy of molecule A is smaller then the activation energy needed in B and that's the reason, why the reaction ist faster?

An interesting question is how (or if) one really knows if both reactions proceed via bonafide SN1 type mechanism. Under the assumption that both reactions proceed via bonafide SN1 mechanism, we must infer that the carbocation (carbenium ion) intermediate 1 in both cases must be the same. While the previous answer correctly assumes that this intermediate may be described well as planar (at the carbon centre), the attack by water is the faster step and hence should not affect the overall rate of the reaction. Since both A and B must proceed through the same intermediate, (although not rate determining!), both must react at the same rate with the incoming nucleophile.

A better explanation can be deduced by looking at the most preferred conformations in the two starting materials. These are designated 2 and 3 below, for A and B respectively. In both cases, the bulky tertiary butyl group will likely prefer to be sat at an equatorial position to minimise 1,3 diaxial interactions. Once tertiary butyl group is "locked" at the equatorial position, we have to place the bromine axially (up) in A (2), and equatorially (down) in B (3).It is possible to argue (although still very qualitative and hand-wavy) that 3 is likely more stable than 2, since both groups are equatorial in 3.

Now, the rate of a reaction depends on the activation free energy barrier, which is the difference between the free energy of the reactant and that of the transition state. At this stage, without computation it is impossible to predict which transition state will be at a higher or lower energy. However, speculatively, to a first approximation the energies of the transition states would be very similar. Under this assumption, the activation energy barrier for A (higher energy conformation) should be less than that for B, which should explain the observed reaction rates.

Having said that, I would not necessarily think that energy diagrams are the best way to explain this difference in reactivity, or indeed if there is a single, simple explanation. 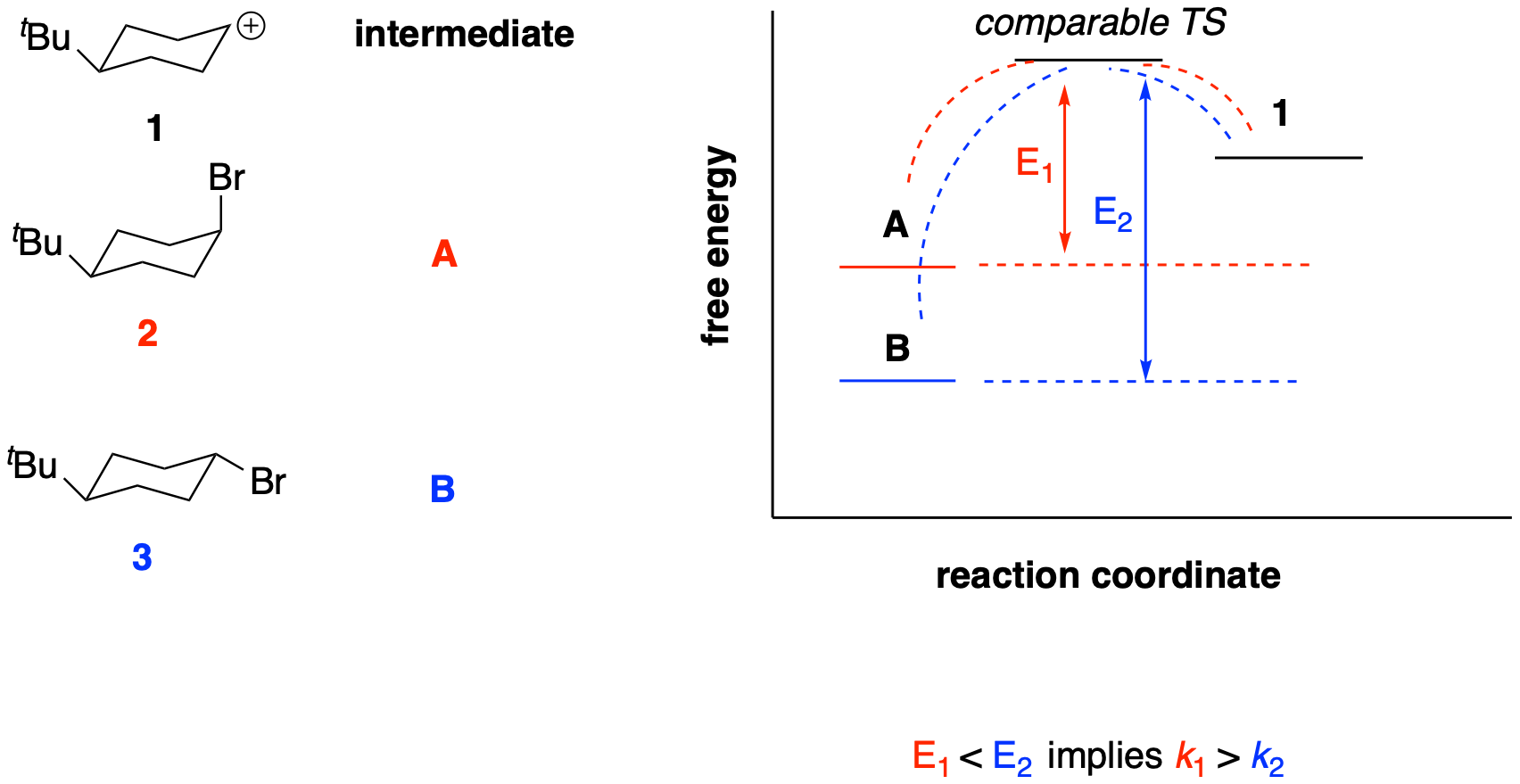 I would rather not solve this by comparing potential energy values.

Instead there is another theoretical way of doing so.

When SN₁ happens, either the attacking reagent( In this case water) can attack from above or below the planar carbocation.

In the first case, Br⁻ leaves from above, and now water can easily attack from below.

2
Which of the these SN1 solvolysis of two alkenyl bromides reactions is faster?
2
Order of reaction / Rate-determining step in enzyme catalysed reactions
6
How would you measure the rate of this SN1 reaction?
2
How to explain the selectivity between methanol and methanethiol in an SN1 reaction with an halogenated hydrocarbon?