Why is a weak base more able to deprotonate a strong acid than a weak acid?

Why does a weak base 'prefer' to deprotonate a stronger acid? Is it because, being a stronger acid, the carboxylic acid will have more anions in solution compared to the weaker acid, so the (relatively few) cations of the weak base will be more likely to find carboxylates than phenoxides?

If this is the case, could we still use a strong base, but just in a very very low concentration and have the same effect as using a weak base at a higher concentration? 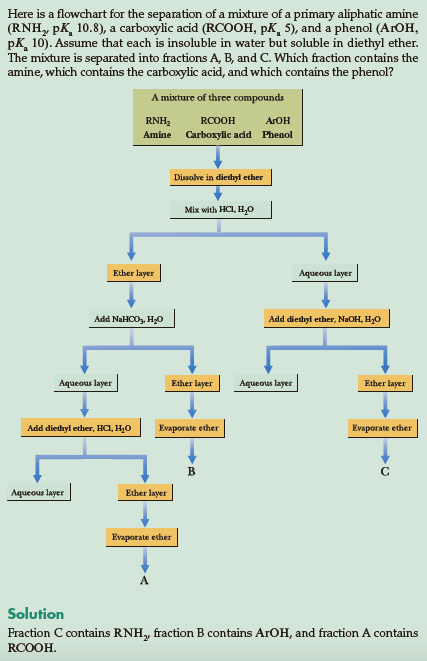 The key is that water is the great equalizer and mediator. Let's deal with weak and strong base first: You are right that a sufficient quantity of a strong base would have the same effect. In this particular case, the hydrogencarbonate will separate into $\ce{CO2}$ and water on protonation and we can assume that most of the carbon dioxide will bubble out. So it will functionally not make a difference whether you started with $\ce{NaOH}$ (a strong base) or $\ce{NaHCO3}$. This is a part of the equalizer part: in an aqueous solution, you cannot have a stronger base than $\ce{OH-}$, because any stronger base will just deprotonate a readily available water molecule.

To some extent, even weak bases will do so in an equilibrium. To understand how a proton gets from an acid to a base, we have to understand the structure of water: A water-based solution like the one from the question is a huge network of water molecules engaged in hydrogen bonding with each other and mainly electrostatic bonding to ions. A when a proton "moves" through this network, it will basically jump from one water to the next, and that water will give up a proton to the next etc. (This is the reason for the huge mobility of protons in water as measured by conductivity experiments.) Thus, an acid and a base such as $\ce{RCOOH}$ and $\ce{HCO3-}$ do not have to come close to each other to effectively transfer a proton between them.

Thus the question "How does the base know to deprotonate the strong acid instead of the weak acid?" loses its basis. In an equilibrium, the stronger acids and bases will deprotonate and protonate more, respectively, than their weaker counterparts because that's what acid/base strength means.

Not the answer you're looking for? Browse other questions tagged acid-base extraction or ask your own question.

25
Why is acetic acid more acidic than phenol?
2
Why is sodium sulfate neutral while its conjugate acid is weak?
1
Why do the amino groups in EDTA deprotonate first, in contrast to amino acids?
6
Why do most carboxylic acids have high pKa (~5) in spite of having a conjugate base ion that is stabilized by resonance?
5
Calculate pH of a weak acid and weak base neutralization reaction
3
What actually happens in strong acid- weak base reactions?
8
Why is 4-hydroxypyridine more acidic than benzoic acid?
0
Why are some weak acid equilibrium approximations invalid in very dilute solutions?