Can somebody explain the low temperature Schottky anomaly for two level systems?

Statistical thermodynamics question. Can somebody explain the low temperature Schottky anomaly for two level systems? Why is this anomaly not seen in all materials?

The Schottky anomaly is a general feature of two levels systems. The heat capacity is defined as $\displaystyle C= \left( \frac{\partial U}{\partial T} \right)_\Delta$ where $U$ is the internal energy and the energy gap between the two levels is $k_B\Delta$, $k_B$ being the Boltzmann constant.

When both levels are almost populated equally, which occurs at very high temperature, no more energy can be absorbed and the gradient $dU/dT$ effectively becomes constant and so the heat capacity becomes small and tends to zero.

Similar behaviour is observed when there are three or four etc i.e. a small number of levels. In the 'normal' case of a molecule there is effectively no upper limit on the number of levels that can be populated as temperature increases, and the slope of $U$ vs $T$ has a constant finite value which leads to $3R$ as the heat capacity per mole at high temperatures. 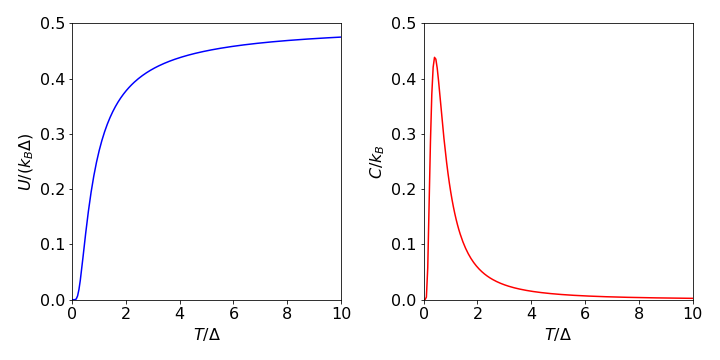 2
How does the chemical potential allow for open systems to be considered?
5
Why does thermodynamics only apply to macroscopic systems at equilibrium?
1
Negative temperature as limiting case for two-level system
1
State functions and their arguments
1
Finding final temperature for adiabatic expansion
1
Will the motion of particles always increase with the rise of temperature?
1
Concept of enthalpy at a given temperature