Why are tertiary amines less basic than secondary and primary amines in water than when vapourised?

However, when dissolved in water:

My notes mentioned the reason for this is because of the increased steric hindrance from the greater number of alkyl group which makes the lone pair of electrons on the N atom less available. But, if this is the case, why doesn't steric hindrance affect the basicity of tertiary amines when in a gaseous state?

After some research, I found that the conjugate acid of an amine can be stabilised by solvation. But, shouldn't the stabilisation be the same, because of the attraction of electronegative O in a water molecule to the positive charge on $\ce{N}$ in an ammonium salt? (can ammonium salts still be stabilised by hydrogen bonding? I thought ions don't form hydrogen bonds with water, they form ion-dipole attractions)

Unless the effect of steric hindrance comes in here, where the alkyl groups reduce the strength of the ion-dipole attraction between the ammonium ion and thus the stability?

I'm really confused how everything links up; appreciate it if someone can kind of clear this up.

A possible answer from what I've searched on the internet so far..

The strength of basicity of amines depends on two factors: 1) the availability of the lone pair for donation to a proton, 2) the stability of the conjugate acid of the amine.

In methylamine, the conjugate acid, $CH_3NH_3^+$ will attract water molecules and ion-dipole interactions will form between the cation (the conjugate acid of methylamine) and the partial negative charge on O in the water molecule. This ion-dipole interaction or attractive force helps to stabilize the positive charge on the cation. 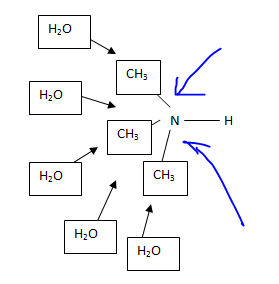 In the gaseous state the basicity can simply be compared on the basis of availability of lone pair. In tertiary amine the nitrogen atom receives +I effect from all the three methyl groups which increases the electron density on the nitrogen atom ,thus its lone pair is readily available. Whereas in secondary and primary amines the nitrogen atom receives+I effect from two and one methyl group respectively. So there lone pair are not as readily available as of tertiary amines. When in aqueous phase the amines interact with water. This interaction also includes hydrogen bonding. This interaction causes steric repulsion. Thus it affects the basicity and causes the order to be so. Note : the shape of amines is Tetrahedral with three surrounding atoms and one lone pair. So there is minimal steric repulsion in gaseous state. The main reason for steric repulsion in aqueous phase is the interaction with water.

Not the answer you're looking for? Browse other questions tagged acid-base amines or ask your own question.

3
Are aromatic amines or amides less basic?
4
Intermolecular forces in secondary amines compared to primary amines
3
Are primary, secondary, and tertiary amines considered functional group or chain isomers?
4
Why are amines more soluble than ethers in water?
2
Why is sodium sulfate neutral while its conjugate acid is weak?
2
Acidity of primary and secondary amines
5
Why tertiary amines can't show chirality?
3
The intrinsic electron-withdrawing nature of alkyl groups
4
Why are amidines more basic than amines?