Why do glow-in-the-dark substances dim gradually?

Related: How do things glow in the dark?

Growing up, I had glow-in-the-dark stars on my ceiling and after being "charged" by having my lights on, they would phosphoresce for quite some time.

However, throughout the night, a star would gradually dim. I imagine that the cause of the stars becoming dimmer is that some electrons are relaxing down before others.

I thought the thickness of the star could be part of this as the more inner parts likely receive less light, so perhaps this bit would completely dim out before the surface of the star. However, my thought is that the star should either be completely "charged" or cast no light at all, like a switch.

The dimming effect is gradual. Why?

There are two potential questions here: one is why is dimming a slow drawn-out process (incoherent, unlike a "switch"). The second question is why different stars may appear to lose their intensity at a different rate.

The light-emission process behind your stars involves phosphorescence. The process involves relaxation of an electronically excited system during which it undergoes a "forbidden" triplet$\rightarrow$ singlet transition. For an individual system, light emission is controlled by the probability of the quantum-mechanical interconversion (or equivalently by the lifetime of the triplet state). It is a stochastic event described by Poisson statistics or "shot" noise.

However, the luminosity of one star represents the collective behavior of a large number of emitters (systems). One star, therefore, appears uniform in luminosity and its time-dependent luminosity decays exponentially.

Variability might be expected in the luminosity of different stars. This is not likely to be QM statistics since, as already noted, you are observing a very large ensemble of relaxing molecules, and one fairly uniform decay constant is expected for all stars, assuming the phosphorescent material is uniform. It seems more likely that luminosity differences among or within stars may occur due to size effects or differences in the concentration of phosphorescent material, or both$^\daleth$. Stickers that are thicker or containing a greater concentration of excited phosphorescent material, due for instance to variability in the manufacturing process, should appear to glow longer simply because they contain more emitters$^\dagger$.

$\dagger$ As helpfully pointed out in the commentaries, more emitters lead simply to the detection limit being reached later.

$\daleth$ As helpfully emphasized in yet another comment, and alluded to in the OP, it is the concentration of excited phosphorescent material that determines the luminosity, and excitation may also depend on the dimensions of the star.

I imagine that the cause of the stars becoming dimmer is that some electrons are relaxing down before others.

This statement could be interpreted in two different ways, one incorrect and one correct. It could mean that electrons have an "on" state where they continuously emit light. That is not the case. Instead, they emit light once while going from an excited to the ground state. It could also mean that different electrons relax at different times. As electrons relax, the total number of excited electrons decreases. As a consequence, there are fewer excited electrons after some time, and as such fewer electrons that can emit at that later time. This is the correct interpretation.

my thought is that the star should either be completely "charged" or cast no light at all, like a switch.

This is a conceptual model that goes against the OP's observations, so we already know it does not work this way, but the question is why.

To address this, here is a setup that does have the properties of a switch. I will use this alternate setup to compare and contrast. Take a star lit up by multiple light-emitting diodes (LEDs) powered by a battery. In LEDs, the electron flow continuously gets electrons into excited states, which then relax to ground states, giving off light. As a consequence, the LED will emit light until the battery is discharged to a degree that it no longer provides the necessary voltage. As a consequence, all the LED's will turn off at the same time.

Now let's compare and contrast with the glow-in-the-dark stars. They contain electrons that get excited in the first phase (shining light on them) and then they go back to the ground state once in a slow process that takes hours. You can measure the light emitted, as in this experiment: 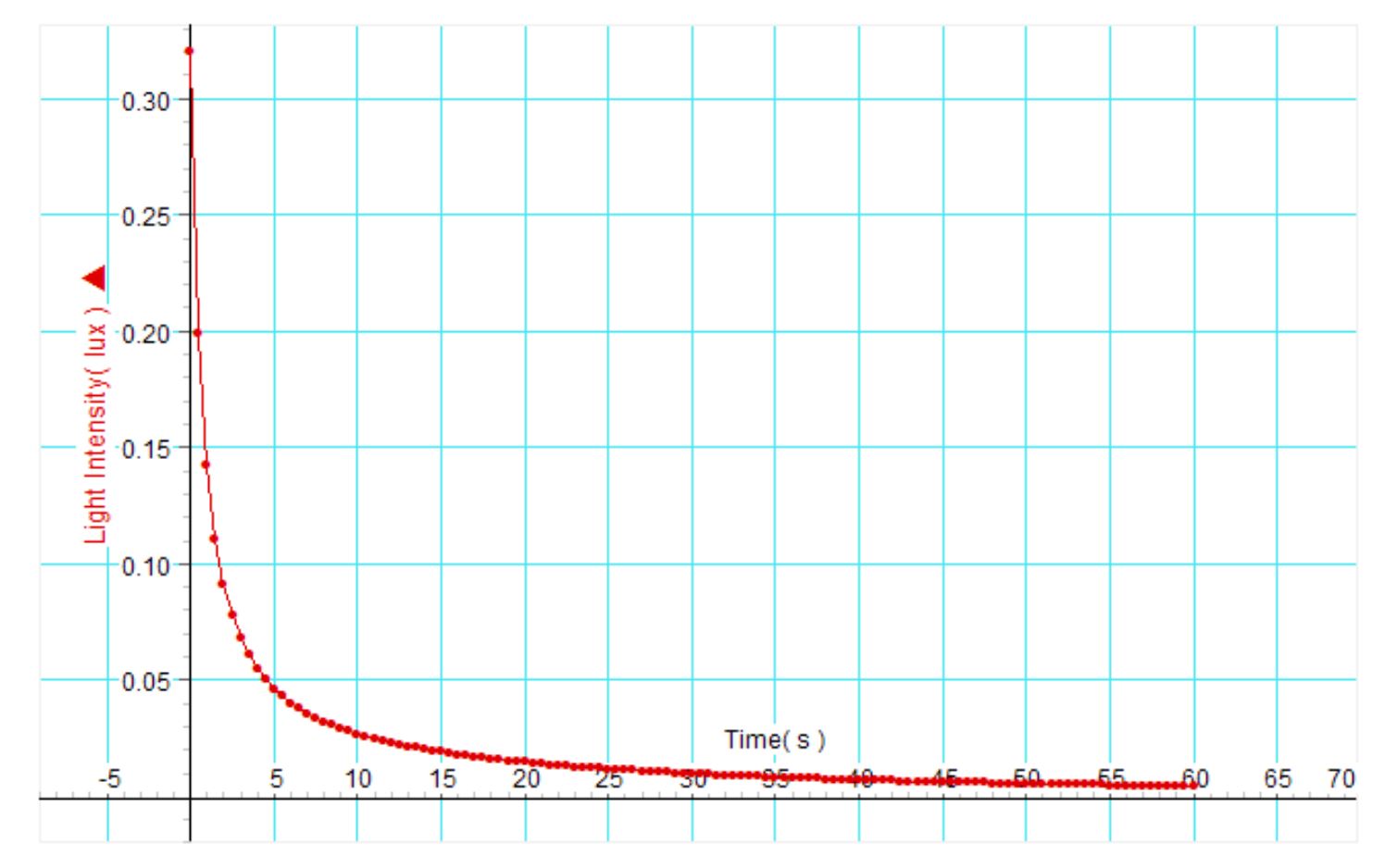 This is not what we perceive when looking at glow-in-the-dark stars in a darkened room (probably because our eyes adjust continuously because the is no background or reference of constant brightness). Also, at one point we will probably fall asleep.

Mechanism at the atomic level

The Journal of Chemical Education has a nice article on this (Lisensky et al 1996, DOI: 10.1021/ed073p1048). Here is a quote from the abstract that connects kinetics with mechanism:

And as an aside, here is a diagram from Wikipedia (article: Light-emitting diode physics) showing how LEDs are continuously providing excited electrons and holes they can fall into: 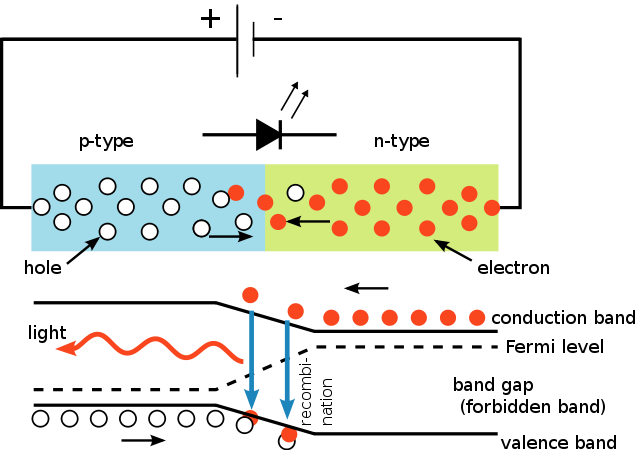 Not the answer you're looking for? Browse other questions tagged fluorescence phosphorescence or ask your own question.

2
How do things glow in the dark?

3
Why are most glow-in-the-dark things green?
6
Why do different substances containing saturated hydrocarbons burns with different flame?