If you give me the name of a certain space group, for example, the P222 (orthorhombic system). How could I construct the following diagram? 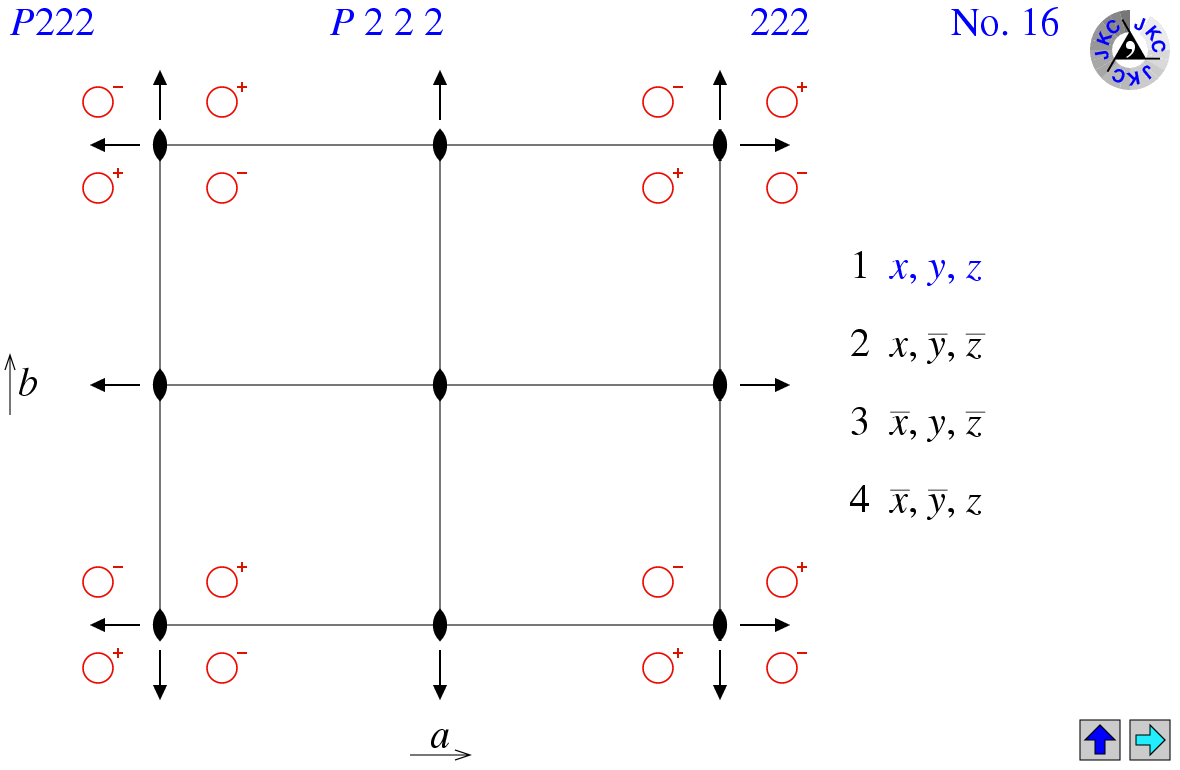 I know it's probably an ambiguous question. I, in the subject of Chemical Crystallography, have given the concepts of sliding plane, helical axis, among others. But, at the time of making this type of diagrams and giving the coordinates of the special positions or those of Wyckoff.

Here is a rough outline how you could proceed:

The space group symbol summarizes the symmetry operations in the crystal. In your example, there are two-fold axis in three directions (222). Which directions depends on the crystal system; for orthorhombic, they are mutually perpendicular.

For the complete set of crystal systems, see here or here for example.

In your example, there are additional symmetry elements that don't go through the origin, but cut axes at 1/2. These are from combining translation perpendicular to a 2-fold with the 2-fold operation.

Now, you can show these in the diagram. The coordinates in $a$ and in $b$ are shown by positioning, while the coordinate in $c$ is shown by $(+)$ or $(-)$ in this case. As you can see, there are 4 circles inside the cell, corresponding to four positions.

There are a finite number of space groups, and they are all known and tabulated in the international tables. So as an exercise, you could go through each one of them, correlating the space groups symbol with the general positions and the arrangement of symmetry elements.

The International Tables are not available for free online, but are available in many chemistry libraries. Online, you can find a list of space groups at http://img.chem.ucl.ac.uk/sgp/mainmenu.htm, and also a guide to the symbols used for the different symmetry elements. Wikipedia also lists the space groups with short names and full names by space group number and crystal system.

5
What does it mean to say “the 222 space group”?
3
Crystal structure database search for space groups
5
What is the diagram of the roto-inversion of $\bar 6$?
4
Sulfuric acid symmetry point group
3
Space groups: Herman-Maugin notation, diagrams and Wyckoff positions
0
Symmetry Space Group Diagram
7
$P 4_{2} 22$ tetragonal group choice of origin for symmetry of special projections