How to reduce surface tension of oil?

I would like to create tiny colored drops slowly falling down in a transparent liquid.

The diameter of the droplets must be around 2mm, and their speed must be approximately 0.5 mm / sec.

For that, I need the colored liquid to be slightly more dense than the static liquid.

The easiest setup is to drop water into oil with a syringe.

However, when I drop water from air, the oil surface tension prevents water drops to fall slowly into the oil.

And when I put the needle in the oil, the water accumulates around it and creates huge drops.

I would also like to pump back the water at the bottom to re-inject it later on; so the two liquids must be immiscible.

Is there a simple way to solve this problem?

A better setup would be to increase the oil density so that I can drop it in water (which is cheaper, so much better if I need to scale up my system). I asked another question for that purpose but I could not find any cheap heavy compound miscible with oil.

2 mm drops of any liquid in any other liquid will be very unstable, and will grow to be an entire layer. Perhaps you could buy some plastic spheres of the size you desire, made from plastic slightly heavier than water. Then you can adjust the rate of fall by thickening the water. If you use an organic thickener, like xanthan gum, you should probably add a biocide.

If the plastic spheres are lighter than water, you could add ethanol or isopropanol to decrease density (but viscosity will also decrease). Glycerine has a specific gravity of 1.24, and can be mixed with water to increase density and viscosity.

You may ease the droplets of water to "fall further down" across the oil by adding some of dishwasher into the water.

As just tested with a glass filled with some of sunflower oil, the water-dishwater droplets reaching the surface air./.oil will deform and flatten when they fall from about 30 cm above on said surface. Eventually however, cohesion and surface tension of water contracts these and they pass across the oil in droplike shape to reach the bottom of the glass where multiple water-dishwater droplets may coalesce.

Limitation: Since dishwasher is a surfactant, however, it renders the two phases miscible in each other. Stirring the content of this glas will distroy the bounderies of the two condensed phases. (Which might be not your concern, though, reading "I could not find any cheap heavy compound miscible with oil [fit for this purpose]".) It won't create you a thing similar like a "sand clock" which may be used again and again.

Addition since the original post was edited:
James Guides indeed added a good thought to the table. Perhaps you do not need a liquid A imiscible to an other liquid B to study the fall of droplets, and you may use spheres instead. Depending on perspective, this then is a problem of fluid mechanics (mécanique des fluides) as in applied biochemistry (e.g., here) and rheology (e.g., sphere viscosimeter). In a steady state, the settling velocity $V_s$ may be described as

with
$r$ the Stokes radius of the particle
$g$ earth's gravitational accleration
$\varrho$ the densities of of the particle ($\varrho_p$), or of the liquid ($\varrho_l$), and
$\mu$, the dynamic fluid viscosity (which depends even more on temperature, than $\varrho$).

Other than the two fields mentioned above, this relation is of importance havesting small crystals for X-ray diffraction analysis. From there I know about documenting examples as in the screen photo below 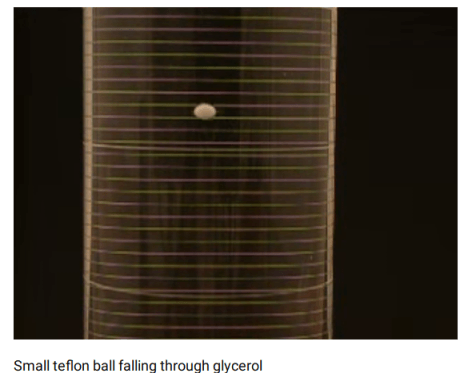 taken for a large, a medium, or a small sphere of Teflon falling in a column of glycerol. It equally allows to understand why you can't harvest small objects in a viscous medium from a bottom of a container with a spoon and have to resort to a fork. (And with 2 mm of diameter, Brownian motion wont inhibit yet their settlment.)

0
How to make oil more heavy?