The produced energy, is due to the mass defect between the reactants and the products, which is transformed to energy, according the mass-energy equivalence.

But if the products of each process(fission, and fusion) are more stable, that means that they have more binding energy, thus, shouldn't the mass defect be transformed to nucleus binding energy, rather than emitted as heat or another sort of energy ?

Note that binding energy of nucleons does not mean contained energy, but the energy needed to break it.

It is the same as for chemical bonds, just some 6-7 orders higher.

E.g. nitroglycerine has lower binding energy per atom than reaction products formed by its explosion.

That is correct. But note that there is a distinction between "light nuclei" and "heavy nuclei."

The nuclear binding energy curve is shown below. 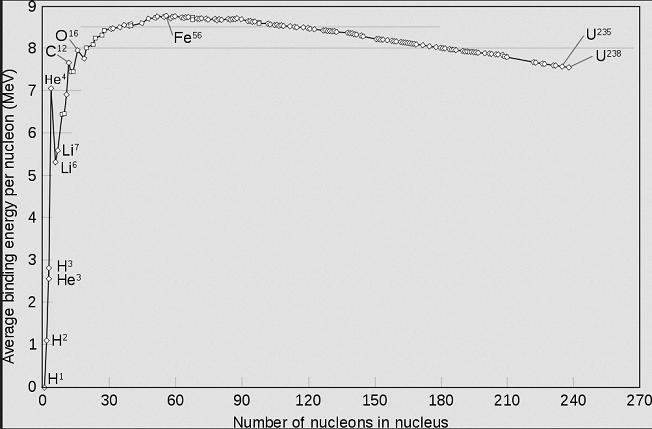 So in a star fusing light elements to form heavier isotopes releases energy until $\ce{^{56}Fe}$. To make heavier elements requires energy. Thus elements heavier than $\ce{^{56}Fe}$ are not made by stellar fusion, but from super nova explosions and the collision of neutron starts.

Not the answer you're looking for? Browse other questions tagged nuclear-chemistry or ask your own question.

5
Can nuclear fission or fusion occur together with bond formation in a reaction?
12
Is iron the most stable element in the periodic table?
1
Why can't a reverse fission reaction be automatically classified as a nuclear fusion reaction?
1
Why does atomic charge not balance in nuclear reactions?