What is the physical origin of conjugation?

I had a question about the origins of conjugation in conjugated molecules. Take two ethylenes as compared to butadiene. Huckel seemed to argue that conjugation was the result of pi-pi stabilization interactions between the HOMO of the two ethylene molecules. More specifically, he argued that during the creation of Ψ1 and Ψ2, the former is lowered in energy more than the latter is raised in energy, leading to overall stability. 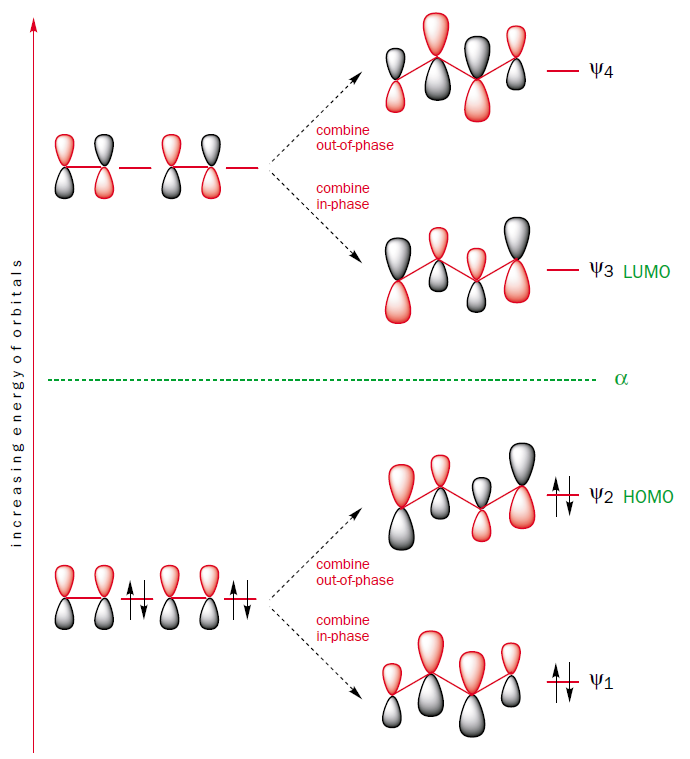 While this explanation satisfies me very much, I have also come across some literature (especially in organic chemistry) citing that π->π* hyperconjugation the main contributor to the stabilization of conjugated molecules. While I do understand this, I "feel" that Huckel's definition is more satisfactory. I am wondering if anyone could give some validity to the latter and if someone could point to the major factor for stabilization in conjugated molecules.

organic-chemistry molecular-orbital-theory resonance
Share
Improve this question
edited May 15 '19 at 10:41

I think you have posed an interesting question. Upon looking through some literature, I have chanced upon the answer to your question in Fleming (2010), p. 30-31. The diagram below was also taken from the discussion in the book.

What you have proposed are two ways of constructing the $\pi$ molecular orbitals of butadiene from the $\pi$ molecular orbitals of two ethene molecules. What is normally discussed is the one shown on the left, whereby we consider the interaction between the two filled MOs of exactly the same energy and a similar interaction between the two unfilled MOs of equivalent energy. Considering the bonding and antibonding combinations allows us to derive the four $\pi$ Mos of butadiene.

You also propose considering $\pi$ to $\pi^*$ conjugation as an alternative way of deriving the butadiene $\pi$ MOs. Diagramfmatically, what you are essentially referring to is shown in the MO diagram on the right. Firstly, this interaction cannot be the main interaction between the two ethene $\pi$ systems simply because it would result in the butadiene $\pi$ MOs comprising of two separate levels of two degenerate MOs each, which is quite different from the picture which we are aware of, which has 4 $\pi$ MOs of different energies. Secondly, note that this interaction is considerably weaker due to the large energy difference between the $\pi$ and $\pi^*$ MOs of an ethene molecule. Recall that for a strong interaction between any two orbitals, one of the important conditions is that the energy difference between them must not be too large. In fact, the strongest interaction is obtained when the energy difference between them is zero. This interaction would contribute to the energies of the $\pi$ MOs in butadiene but the contribution would surely be less than the one that is highlighted in the previous paragraph. 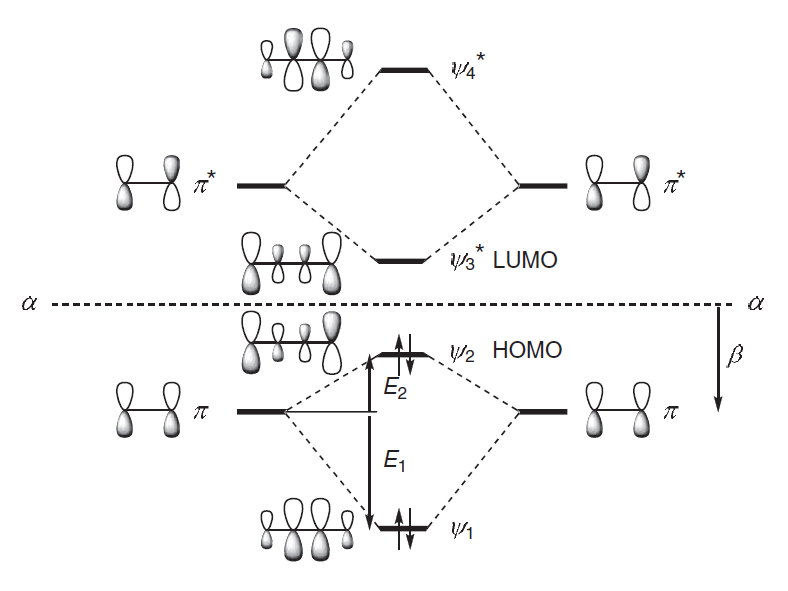 Does it really matter if we factor in the weaker interaction into our considerations? Yes, it does. If we were to not do that, we would observe that the stabilisation predicted would not be as great as the one which we would predict from just looking at the MO diagram shown on the left. In fact, as Martin writes in the comments, the interaction between orbitals would produce an antibonding MO that is more antibonding than the bonding MO produced is bonding. If we were to not consider the weaker interaction, then we would predict that $\psi_2$ is raised more in energy from the original $\pi$ level than $\psi_1$ is lowered in energy from the original $\pi$ level (i.e. $\ce {E_2}$ is larger than $\ce {E_1}$), and this is clearly not the case.

Of course, as you mentioned, we can also build the $\pi$ MOs of butadiene from first principles via the Huckel method. I am not very well-versed with the mathematics behind the method but I do believe that the method discussed above and the original Huckel method would converge in terms of the results obtained eventually. Hence, they are equally valid approaches to the problem.

108
Is there a general consensus on the causes of the alpha-effect?
7
Hyper conjugation in acetic acid?
23
How does the cyclopropyl group influence conjugation and aromaticity?
9
How does conjugation affect reactivity?
0
How far-reaching is the effect of conjugation?
3
When is donation into an anti-bonding MO stabilising?
1
Cross-conjugation