Task: Explain the reaction mechanism of 1,4-Dioxane in terms of how you get peroxides. Start here with the autoxidation with one radical X. 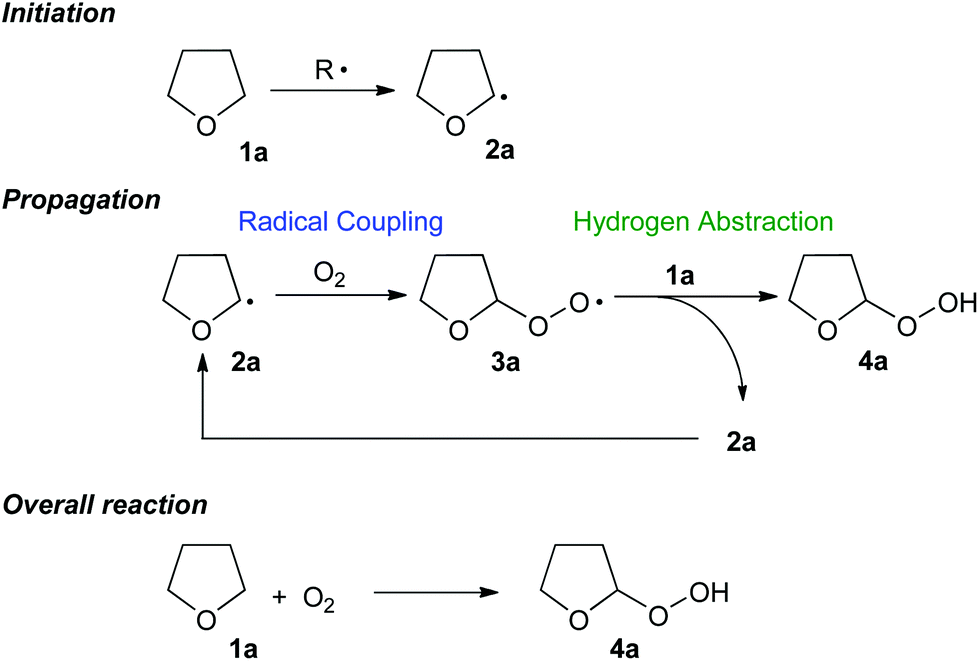 Liquid-Phase Photolysis of Dioxane has been studied in several occasions in the past. One of these studies, several neat aliphatic ethers including dioxane were irradiated for $\ce{24 h}$ with a medium-pressure mercury lamp (Ref.1). As a result, the neat liquid-phase dioxane has been reported to yield gaseous, liquid, and solid products after the irradiation. Among the products, the major gaseous products were identified as $\ce{H2, CO, CH4, C2H4,}$ and $\ce{C2H6}$, but the liquid products have not been analyzed. However, the solid products were shown to be the racemic and meso forms of dioxyldioxane (see total reaction illustrated in the diagram to give solid product):

Pfordte rationalized the formation of dioxyldioxane as a simple dimerization of dioxyl radical formed by photoinitiated hydrogen abstraction from dioxane (Ref.1, 2):

Thus, it is safe to conclude that dioxane is susceptible to sun light and/or a foreign radical from any other source. Thus, after a long time exposure to sunlight or a in the presence of a foreign radical, the formation of dioxyl radicals is possible and exposure to environment would supply oxygen (also dissolved $\ce{O2}$) to further react as shown in the propagation step as follows:

2
Which of the these SN1 solvolysis of two alkenyl bromides reactions is faster?
3
Reaction between RCH2=CH2 and CCl4 — Why does it form RCHClCH2CH(R)CH2CCl3 along with RCHClCH2CCl3?
5
Explaining differences in rate of propagation based on monomer structure
2
Mechanism of acid-catalyzed addition of water across an alkene
2
How would this reaction look like in a potential energy diagram? (SN1 Reaction)
3
Order of reactivity of substrates towards Wurtz reaction