I was given this molecule (3,4-pyridyne) in a test:

I had to find out if it had any atoms which had a hybridization state other than sp2. The solution said that it doesn't have any. But aren't the triply-bonded carbon atoms sp-hybridized?

Edit: Benzyne also has a similar structure, with a distorted triple bond - 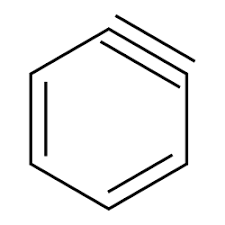 TL;DR It is sp-hybridised, but maybe not in the way we normally think of alkynes as being.

There are a couple of things to say before going into the actual answer.

Firstly, hybridisation is derived from geometry, not from the bonding pattern (in other words, how many σ- and π-bonds there are). In most cases, the bonding pattern dictates the geometry: for example, most saturated carbons are tetrahedral, and a tetrahedral geometry usually signals sp3 hybridisation, so saturated carbons are usually described as being sp3-hybridised. So, effectively, the bonding pattern does dictate hybridisation. This is all fine, but only up to a certain point, because it can break down in exceptional cases such as cyclopropane. Because of the geometrical constraints of a three-membered ring, there is not quite enough room for the carbon to be perfectly tetrahedral, and so it is not correct to label the carbons as being sp3-hybridised in the usual sense.

Secondly, hybridisation is usually more nuanced than "sp", "sp2" or "sp3". It is individual orbitals that are hybridised, not atoms; so for example, we can talk about an sp orbital, which is a linear combination (a sum) of one part s-orbital and one part p-orbital. When we say that "a carbon atom is sp-hybridised", what we really mean is that the bonding of that carbon atom can be described using four valence orbitals: two sp-hybridised orbitals, and two unhybridised p-orbital. Likewise, an "sp2 carbon atom" uses three sp2-hybridised orbitals and one unhybridised p-orbital; and an "sp3 carbon atom" has four sp3 orbitals.

Again, in the vast majority of cases, these three categories are sufficient to accurately classify all carbon atoms in a molecule. However, as you may guess, this breaks down in exceptional cases: cyclopropane is the most well-known example. Here, each carbon has two sp5(ish) orbitals and two sp2(ish) orbitals. It uses the sp5 orbitals to form σ-bonds to the carbons next to it, and the sp2 orbitals to form σ-bonds to the two hydrogens on it. "How is it possible to have five p orbitals?" sp5 does not literally mean one s orbital and five p orbitals; it just means the ratio of s-orbital and p-orbital contribution to this particular hybrid orbital is 1:5.

With that out of the way, here is how benzyne works (PBE0/cc-pVTZ gas phase optimisation + NBO analysis). We're going to look at the orbitals that the triply bonded carbon (C1) uses for bonding to its neighbours (C2 and C6, see structure below):†

On their own, the numbers don't tell you which direction the p-orbitals are pointing in, but you can use visualisation software to figure this out. From left to right, these are the (σ- or π-, not the individual hybrid) orbitals, in the same order as listed above.

Based on the above, the orbitals can be crudely illustrated as such:

This is, in fact, pretty much what an organic chemist would describe as an "sp-hybridised carbon atom". However, it is not sp-hybridised in the same sense as an ordinary alkyne. In an ordinary alkyne, the σ-bond between the two triply bonded carbons comes from overlap of sp-orbitals. This is also the case here, but there is a distinction. In an ordinary alkyne, the sp-orbitals point directly towards each other. Here, they are not quite aligned in the same way; they instead form what is sometimes called a "bent bond". The same can be said of the C1–C2 π-bond.

This is fundamentally because of the geometry of the ring. Since we have already allocated two p-orbitals to two other bonds, the two sp-orbitals must be derived from the same p-orbital. As a consequence, the two sp-orbitals must point in diametrically opposite directions, 180° away from each other. If C1 were to use an sp-orbital pointing directly towards C2, then the remaining sp-orbital would point rather far away from C6, significantly weakening the corresponding bond with C6. The orbital geometry that you see is a compromise.

The triply bonded carbons in pyridyne, for all intents and purposes, can be described in the same way as those in benzyne. The effect of nitrogen on the orbitals above is tiny; qualitatively they look the same (the colours are flipped for the first and last ones relative to the benzyne orbitals earlier, but this is of no physical significance).

† The numbers don't add up to exactly 100% because the tiny d- and f-orbital contributions are neglected.

Hybridization derives from geometry, not bond type. For instance, the central carbon in allene ($\ce{CH2=C=CH2}$) has $sp$ hybridization like the carbons in acetylene, despite the absence of triple bonds in the allene, because the linear bonding geometry brings this hybridization about.

In pyridyne the formally triple-bonded carbons do not have the linear bonding geometry corresponding to $sp$ hybridization, rather the geometry corresponds to $sp^2$ hybridization like pyridine or benzene. What seems to be one of the "pi" bonds in the pyridyne structure as drawn on paper, is in fact a "bent bond" formed by the side-by-side overlap of two subsidized orbitals, not a pi bond formed from two $p$ orbitals.

21
Physical intuition behind negative values for wave function?
12
Structure of Benzyne
13
Why is the benzyne triple bond distorted?
8
Significance of phase of atomic orbitals
5
Is hybridization of the cyclopropyl anion sp5?
3
Phases of Atomic or Molecular Orbitals
7
What is the hybridization state of the carbon atoms in [10]annulene?