When it rains, it puddles. Spilled salt cycles between wet and dry with humidity. Is this akin to a phase change?

I have some spilled un-iodized table salt (NaCl). It is very humid where I live, and when it gets very humid for a few days, the salt absorbs so much water that it becomes a puddle of (probably) saturated salt water. When the humidity drops for a few days, the water evaporates and I have dry salt crystals again. This is repeatable.

My questions about this process are:

Some may be familliar with the Morton Salt logo and slogan "When it rains, it pours" meaning that other moisture-absorbing materials in the package will keep the sodium chloride as table salt from absorbing too much water and becoming stuck and un-pourable: 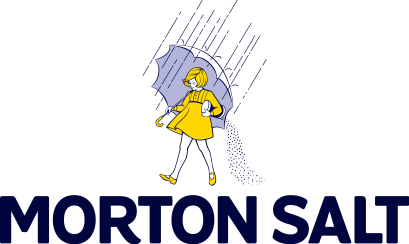 What is this process called exactly? As far as I understand "deliquescence" is a property and not a process. Does the exchange of water between my pile of salt and the air have a specific terminology? Something that would go along with terms like evaporation, sublimation, condensation, etc.? Perhaps some mash-up of adsorption and dissolution?

The property of salts to become wet as I mentioned in another post Scientific Reason for Salt Solution Gaining Volume is deliquescence. The corresponding verb is to deliquesce. It is a pretty old word. From OED (not open access):

To melt or become liquid by absorbing moisture from the air, as certain salts.

1756 C. Lucas Ess. Waters i. 14 They attract the humidity of the air, and deliquesce, or run liquid.

Regarding phase changes, there were many phases changes involved in that process. The water as gas became liquid. The solid NaCl phase become one phase with a liquid. Once it evaporated, you got the solid again.

Not the answer you're looking for? Browse other questions tagged everyday-chemistry water phase or ask your own question.

39
Which "exotic salt" can lower water's freezing point by 70 °C?
17
Using table salt as a way to limit humidity in an unoccupied house
6
Scientific Reason for Salt Solution Gaining Volume
8
Does water really have strong EM absorption at 3 kHz in solid and 2 GHz in liquid? Why the huge shift?

12
Where do the bubbles in a glass of water come from?
7
The Salt Room, is there salt in the air?
7
What is the difference between wet paint, dry paint, and in between those stages?
3
Acetone absorbing water from the air
1
Salt + Sodium Bicarbonate releasing water in carpet
17
Using table salt as a way to limit humidity in an unoccupied house
4
What component(s) of instant coffee make it deliquescent?
8
Why does humidifier put measurable PM2.5 in the air?
5
Is liquid water in equilibrium with water vapor at room temperature?