What is the precise definition of Ramachandran angles?

The Wikipedia article Ramachandran plot is very schematic and doesn't even say when these angles are considered to be zero. It seems to assume that the peptide chain has no end, and always shows the next carbon atom. What happens when the amino acid is in the terminal position? It also asserts that the $\omega$ angle is always 180°, while in the practical cases this isn't exactly true.

The definitions seem to rely on the adjacent bonds. Two on one side, and one on the other side. They rely on the fact that two bonds on one side are in the same plane as the rotating bond. How are these angles defined when relevant bonds don't form a plane?

Additionally, an article by Zhou et al. [1] also talks about the bond angle $\tau$. $\tau$ seems to be a logical addition because it corresponds to an additional degree of freedom, not covered by $\psi-\phi$ angles.

biochemistry molecular-structure proteins
Share
Improve this question
edited May 4, 2019 at 3:41

And here is an illustration from the same source: 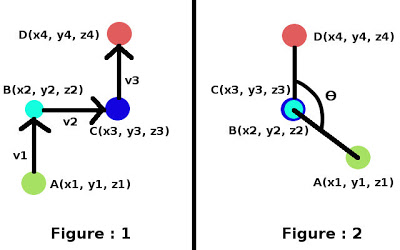 To calculate, use the cross product to get vectors normal to the (v2, v1) and the (v2, v3) planes, and calculate angles between them (it is easy to get the direction wrong, so I would test with known cases).

In the question, the OP states:

They rely on the fact that two bonds on one side are in the same plane as the rotating bond.

No, the plane is between the rotating bond and the adjacent bond. Two bonds of one atom always form a plane. Here is an illustration: Dihedral angle of gaseous and crystalline HOOH

A nice interactive tutorial can be found at Proteopedia: https://proteopedia.org/wiki/index.php/Tutorial:Ramachandran_principle_and_phi_psi_angles

Omega is the torsion angle of the peptide plane. It is most often near 180 (trans peptide) but sometimes near zero (cis peptide).

Analyses as a function of the φ,ψ-backbone dihedral angles show that the expected value deviates by ± 8° from planar as a systematic function of conformation, but that the large majority of variation in planarity depends on tertiary effects.

In protein structure determinations, the omega angle is often restrained, especially in low resolution structures. Looking at structures deposited in the protein data bank, it might therefore seem that the distribution of the omega torsion around 180 is more tight (less varied) than it is in reality.

The first amino acid has no phi angle and the last has no psi angle. Exceptions are when the N-terminus or C-terminus are modified.

Different from the torsion angles phi and psi, the angle tau is a bond angle (depends on three atom position, not four). It is the angle at the C-alpha carbon between the nitrogen and the carbonyl carbon. As an $sp^3$ carbon, the C-alpha carbon is expected to have an angle around $109^\circ$. The larger the angle, the more (phi, psi) combinations are possible without steric clashes, i.e. the larger the "allowed" regions in the Ramachandran plot.

Peptide bonds are rigid and planar in nature and Ramachandran plots are used to analyze protein structures and predict stable amino acid conformations in the protein.

A Ramachandran plot is a method to visualize energetically stable regions for polypeptide torsion angles psi (ψ ) against (phi) φ of amino acid residues present in a protein structure.

A polypeptide chain consists of a regularly repeating part, the main chain or backbone, and a variable part comprising the distinctive side chains. The three dimensional spatial arrangement of the peptide backbone is determined by the relative orientation of the groups connected by these repeating bonds in the peptide backbone.

In a protein chain three diehedral angles are defined as phi, psi and omega. The planarity of the peptide bond usually restricts ω to be 180° (the typical trans case) or 0° in the rare cis case.

The figure shows the $\psi,\, \phi$ angles on the peptide backbone.

Not the answer you're looking for? Browse other questions tagged biochemistry molecular-structure proteins or ask your own question.