Soil based question. I have soil with to much Ammonium Nitrate in it. I am wondering if I use citric acid and water mixed will that flush out the extra Ammonium Nitrate that has built up in the soil.

Any incite on these to compounds will be greatly appreciated.

organic-chemistry experimental-chemistry ph
Share
Improve this question
asked May 2, 2019 at 14:16

Ammonium nitrate is very soluble in water, so watering the soil will remove it, though, depending on the amount and dilution, it could then pollute streams, lakes and other bodies of water, possibly causing an algae bloom.

Your best choice might be to experiment with nitrate-tolerant plants, such as lettuce, ornamental cabbage and rhubarb, or perhaps bell peppers.

Citric acid will not help in any way, and would make the soil less likely to support life.

In nature, denitrifying bacteria will slowly reduce the $\ce{NH4NO3}$. In an anaerobic environment, it might be converted to $\ce{NH4+}$.

I genuinely don't think citric acid would do that for large amount of soil. Yet, there are some microbial processes to remove nitrates from soil though (Ref.1):

Abstract: The microbial processes of denitrification and dissimilatory nitrate reduction to ammonium (DNRA) are two important nitrate reducing mechanisms in soil, which are responsible for the loss of nitrate ($\ce{NO3-}$) and production of the potent greenhouse gas, nitrous oxide ($\ce{N2O}$). A number of factors are known to control these processes, including $\ce{O2}$ concentrations and moisture content, $\ce{N, C,}$ pH, and the size and community structure of nitrate reducing organisms responsible for the processes. There is an increasing understanding associated with many of these controls on flux through the nitrogen cycle in soil systems. However, there remains uncertainty about how the nitrate reducing communities are linked to environmental variables and the flux of products from these processes. The high spatial variability of environmental controls and microbial communities across small sub centimeter areas of soil may prove to be critical in determining why an understanding of the links between biotic and abiotic controls has proved elusive. This spatial effect is often overlooked as a driver of nitrate reducing processes. An increased knowledge of the effects of spatial heterogeneity in soil on nitrate reduction processes will be fundamental in understanding the drivers, location, and potential for $\ce{N2O}$ production from soils.

Denitrification and dissimilatory nitrate reduction to ammonium (DNRA) are two of several important processes that are responsible for nitrogen cycling in soil. Other key nitrogen transforming processes in soil include anaerobic ammonium oxidation (Anammox), which oxidizes ammonium to nitrogen gas ($\ce{N2}$) gas using nitrite ($\ce{NO2-}$) as the electron acceptor. Nitrification, denitrification, and DNRA are all capable of producing $\ce{N2O}$ (See Figure). Both denitrification and DNRA are processes that reduce nitrate ($\ce{NO3-}$) through various intermediate steps to N2 and ammonium ($\ce{NH4+}$), respectively, and are the only soil microbial processes capable of both removing soil $\ce{NO3-}$ and producing $\ce{N2O}$. Denitrification produces $\ce{N2O}$ when abiotic conditions or gene complement prevent its reduction to $\ce{N2}$ and DNRA releases $\ce{N2O}$ as a by-product of the reduction process. 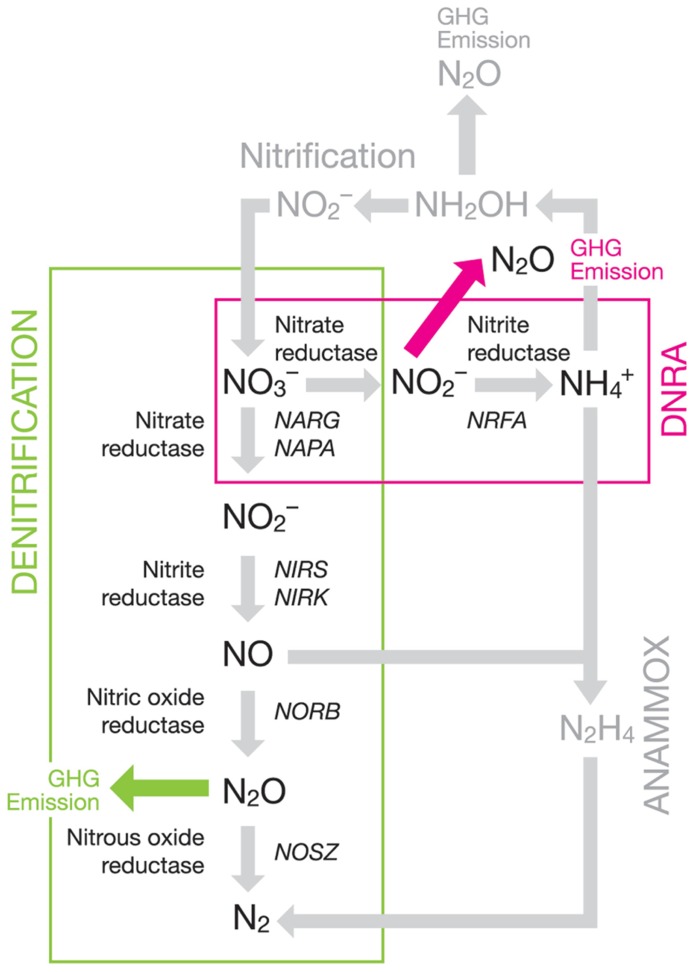 Citric acid will not help flush Ammonium Nitrate from soil, as the other poster says, water will do that fine. For a fertiliser spill on soil, after removing whatever fertiliser you can, add sugar (sucrose) first then water. Microbial action will clean it up.

Not the answer you're looking for? Browse other questions tagged organic-chemistry experimental-chemistry ph or ask your own question.

1
Separating citric acid from sugar
6
How dangerous are these soil organic carbon digestion methods?
0
How to change color of water based on its acidity?
6
How to find out pH of aquarium and apply it when adding HCl?
4
Carius method for quantitative analysis of halogens
4
Electrophilic Substitution with Ceric Ammonium Nitrate and Lithium Bromide as reagents