Path to take when labeling R/S

I'm trying to find the R/S for the carbon marked with the asterisk. As I branched out to from the asterisk carbon to the red carbons, the methyl group has the 3rd priority (with the hidden hydrogen 4th). Here comes the confusion. In order to find the first point of difference for the two carbons, for one of the carbon, I can simply move outwards to the next green carbon (C, C, H). But for the other carbon, there are two paths I can take, one which gives (C, H, H) and the other (C, C, H). Now, which path should I take?

Assuming I take the path that gives me the (C, C, H) carbon. This gives me a tie. Again, I have two paths to take (indicated by the green arrow). Which path should I take? If I choose to go 'down', the two arrow clash at a single carbon.

I have consulted numerous textbooks but none of them seem to even surface this as an issue. In general, if there are multiply paths, which path should one take?

Extension of question: In a scenario that there are two carbon, C1 and C2 that 'ties', and it so happens that each of the two carbons has 'two paths' to take: C1 with path 1 and path 2, and C2 with path 3 and path 4. What happens if the priority of taking the different paths is not clear. Eg. Priority when taking path 1 is higher than the path taken by path 3, but path 2 has a lower priority then when taking path 4? 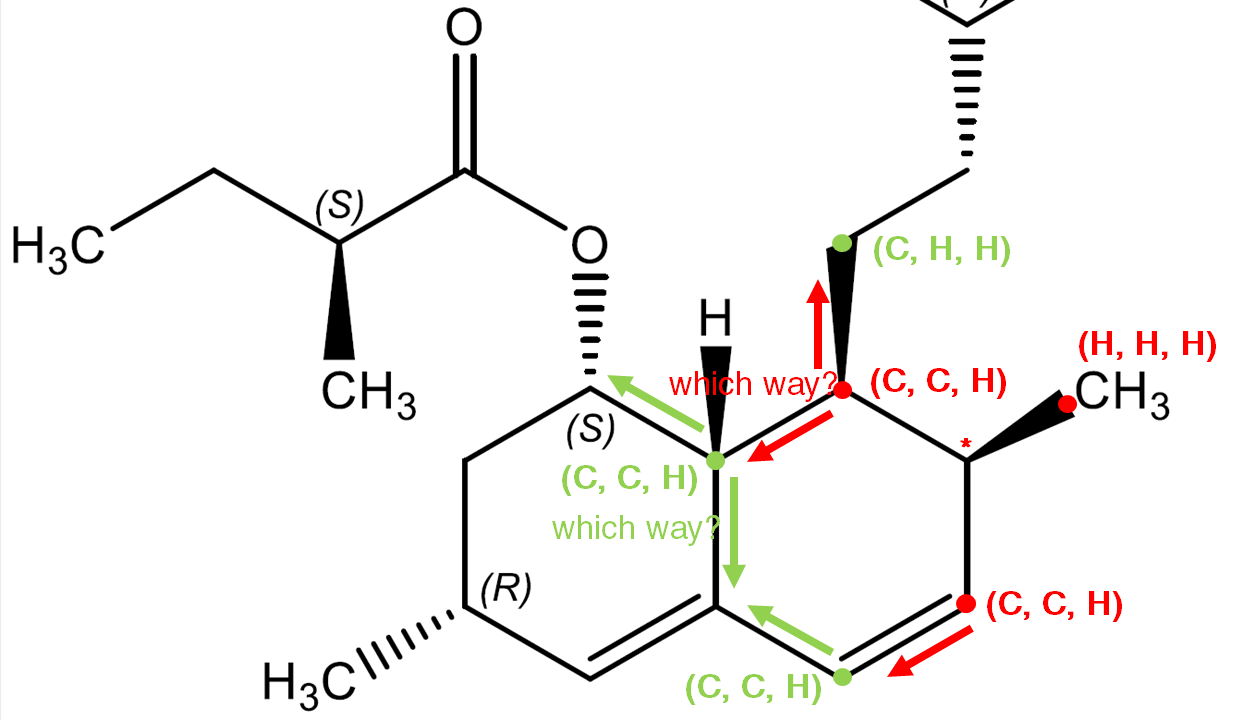 The compound you are presenting is a natural product, compactin. The numbers of the carbon atoms are arbitrary. The digraph of C9 shows how the configuration is determined. Sphere 2 contains the atoms C8, C10, C14 and H. Clearly, hydrogen has the lowest priority. Sphere 3 has the locants C10{15,5,H}, C8{7,(7),H} and C14{H,H,H}. In a one-to-one comparison of the locants, C10 and C8 have priority over C14 because C>H. So C14 has the next lowest priority. C(7), which is a duplicate atom of atomic number 6, is attached to three atoms in sphere 4 of atomic number zero. Zero is as low as you can go. Therefore, the priorities are C10>C8>C14>H. C9 has the (S)-configuration. 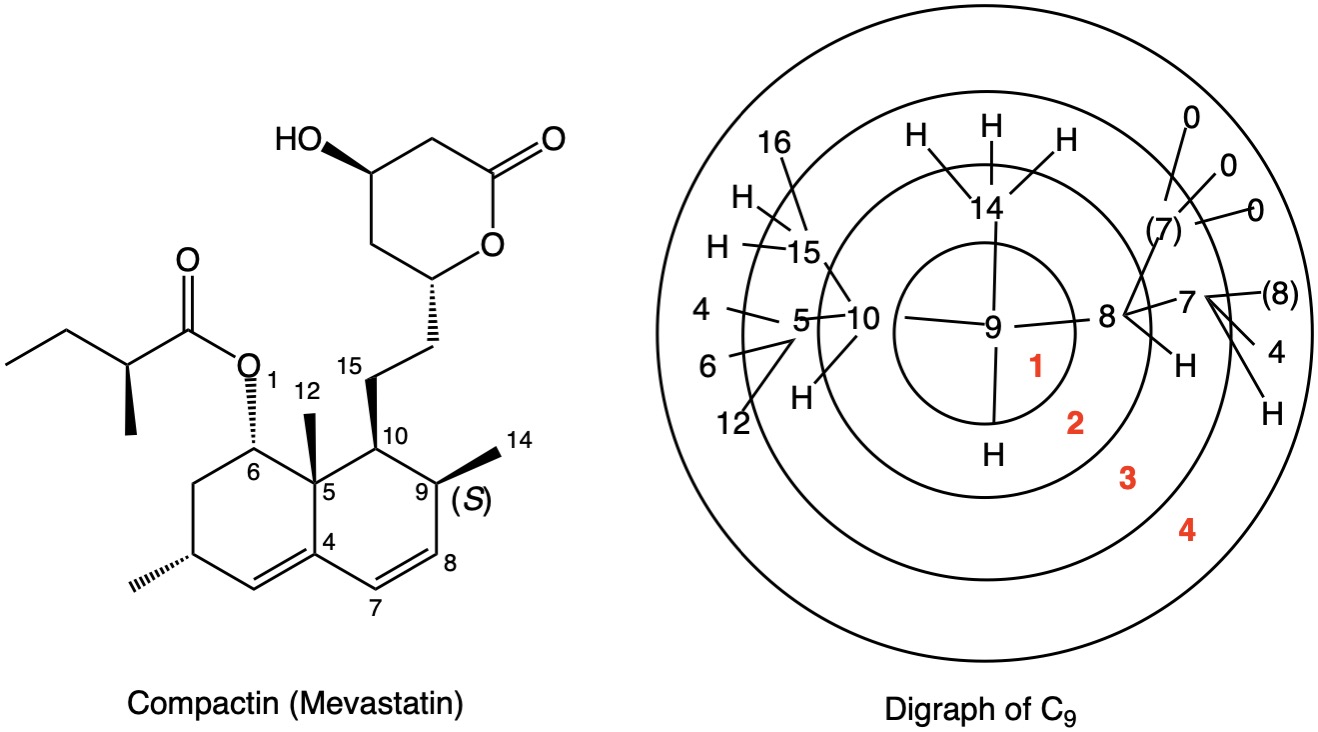 You always have to compare all paths at the same level of depth.

I will use the numbering in user55119’s answer.

The second level of depth for the three C atoms gives us:

The third level of depth gives us:

The first point of difference is carbon 5 versus carbon 7; 5 is attached to three carbons while 7 is attached to two carbons and a hydrogen. Thus, $5>7$, thus $10>8$. This is reinforced by 15 being a real atom with bonds while (7) is a ghost atom not attached to anything. Thus, even if carbon 7 is methylated 10 still wins over 8.

1
R, S Configuration and Branching - Which Path?
4
E/Z stereoisomers : assigning priorities with a cycloalkane group
5
Determination of (R) and (S) configurations from a Haworth projection
2
Alkene Electrophilic Addition Reaction Stereoselectivity When Two New Asymmetric Centers Form
2
How to assign priorities around the asymmetric carbon with its substituents having multiple bonds?
5
Cahn–Ingold–Prelog Rules, cyclic structures, and breaking ties
1
Number of Stereoisomers for Terpin
2
Determining R-S configuration with lowest priority groups in plane of paper