I'm totally confused by the different conventions and when to use what. In the Periodic Table I see

However, in books when talking about isotopes I see

Periodic tables of elements (PTEs) are often abused by designers. Books are more trustworthy as long as they are written by scientists. Long story short, the second notation $(\ce{^{12}_{6}C})$ is the correct one. There is an easy to remember AZE notation: $^A_Z\ce{E}$.

I suspect the PTE you were looking at lists standard (averaged) atomic weights of the elements $A_\mathrm{r}$ rounded to the nearest whole number so it may appear as if those were the mass numbers $A$, probably something like this:

* The atomic weights listed on this Table of Elements have been rounded to the nearest whole number. As a result, this chart actually displays the mass number of a speciﬁc isotope for each element. An element's complete, unrounded atomic weight can be found on the It's Elemental website: http://education.jlaborgﬁtselemental/

Note that a good periodic table usually includes a legend which deciphers and justifies designer's choice. Even better example is the Periodic Table of the Elements by NIST. Despite atomic number $Z$ also located in the upper left corner of the cell, its location is typographically literate as both $Z$ and $A_\mathrm{r}$ have distinct place, different typeface and the legend unambiguously denotes which is which: 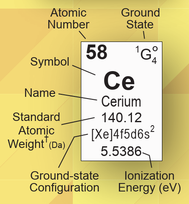 According to the international standard ISO 80000 Quantities and units – Part 9: Physical chemistry and molecular physics (corrected in Amendment 1, 2011-06-01), the attached subscripts and superscripts have the following meanings.

The nucleon number (mass number) of a nuclide is shown in the left superscript position, as in the following example: $$\mathrm{^{14}N}$$

The atomic number (proton number) is shown in the left subscript position, as in the following example. $$\mathrm{_{64}Gd}$$

This notation is also used in Nomenclature of Inorganic Chemistry – IUPAC Recommendations 2005 (Red Book). Note, however, that this document unfortunately introduced the terrible typographic disaster of the staggered notation for ions (see this question).

The mass, charge and atomic number of a nuclide are indicated by means of three indexes (subscripts and superscripts) placed around the symbol. The positions are occupied as follows:

The same notation can also be found in the IUPAC Green Book Quantities, Units and Symbols in Physical Chemistry (2007).

It is also recommended in the ACS Style Guide:

Use the left superscript for mass number

Use the left subscript for atomic number

Different periodic tables show the atomic number above, below, or next to the element. They don’t show the mass number, usually, but the atomic weight (not an integer). There is a type of table, for example the Karlsruher Nuklidkarte, that shows all observed isotopes, and this type of chart does show mass numbers as well.

In the picture, the isotope chart is on the right (https://www.nucleonica.com/wiki/index.php?title=Historical) 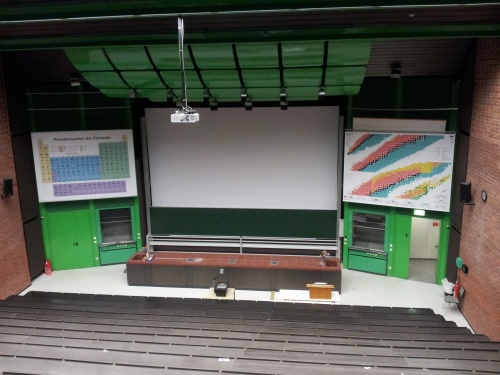 Not the answer you're looking for? Browse other questions tagged notation periodic-table isotope or ask your own question.

8
Superscript and subscript together after the same atom
-2
What is really the number in the periodic table?

4
What is the group number or name for elements between group 3 and 4 (F-block) on the periodic table?
4
What do the numerals on the top right corner of the cells in the periodic table represent?
5
Memorizing polyatomic ions? Using Periodic Table
14
Do non-English speaking countries use the same element symbols?
4
Why are group 1 elements called alkali metals and group 2 elements are called alkaline earth metals?
11
Can isotopes of a given element be represented by different symbols?
10
Why is the probability for the signal at 160 in the bromine mass spectrum twice as high as for the signals at 158 and 162?