Gallium has an unusual structure. Each atom has one closest neighbor at a distance of 2.43 Ă….

This remarkable structure tends towards discrete diatomic molecules rather than a metallic structure. This accounts for the incredibly low melting point of gallium at 30 Â°C.

That's not all, this surprised me as well: 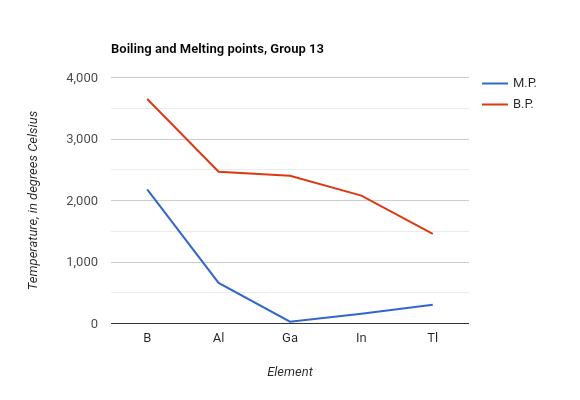 Why does gallium exist as diatomic units, that too in a solid crystal, instead of forming the usual metallic crystal structure? And why not in liquid state (where it seems to be more free to make diatomic molecules)?

I might guess that $\ce{Ga2}$ might form stable MOs, but why do the other members of group 13 abstain from such behavior?

It is quite weird to see an element in the middle of a group staging a drama of exceptions like this, it's usually the 2nd period elements which do that.

For your interest, I quote a paragraph from a book "Handbook of Nanophysics: Nanoparticles and Quantum Dots" by Klaus D. Sattler (Ed.). Section 12-8. I don't think people know the reason as to why Ga likes to exist as a dimer (as you know $\ce{S}$ is $\ce{S8}$ and so on).

The cohesive energy of the elemental solids is defined as the difference between the energy per atom of the solid and the energy of an individual atom in isolation. However gallium is rather unique among metals in that in the solid state it has a very unusual structureâ€”an orthorhombic 8-atom unit cell composed of dimers which have a bond distance 15% shorter than the next nearest neighbor distance. As such, it has been called a â€śmolecular metal,â€ť which really contains two distinct kinds of bonding: covalent bonds within the dimers which result in a pseudogap at the Fermi level, and metallic bonding formed by overlap of the electronic wavefunctions along the buckled planes perpendicular to the molecular bond of the dimer. As a consequence, conduction in gallium is highly anisotropic, with a much greater conductivity along the buckled planes than perpendicular to this direction (Gong et al., 1991; Heine, 1968).

If we estimate the â€śmetallicâ€ť cohesive energy of the solid, by calculating the cohesive energy relative to the dimer, we immediately see that gallium moves much closer to the other elements, as shown in Figure 12.6. In fact, in this case we are still overestimating the cohesive energy relative to the melting temperature, since the dimers in the bulk will be distorted from the free dimer geometry. This argument certainly explains the low melting point of gallium relative to other metals, and due to the anisotropy of the lattice most likely relates to the surface superheating of gallium that was observed very early on (Volmer and Schmidt, 1937). 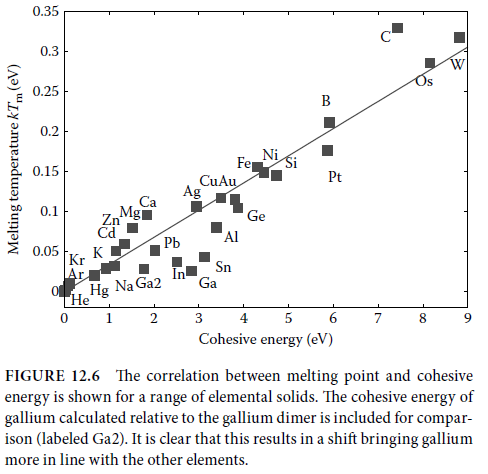 Not the answer you're looking for? Browse other questions tagged molecular-orbital-theory elements melting-point or ask your own question.

3
The melting and boiling point decreases down the group up to group 14 (not including transition metals), but the trend reverses from group 15. Why?